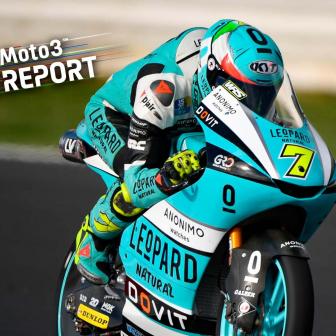 With the odds stacked against him, Dennis Foggia (Leopard Racing) came from P14 on the grid to claim a phenomenal Moto3™ victory at the Gran Premio Nolan del Made in Italy e dell’Emilia-Romagna, as the title fight continues to Portimao. The Italian’s victory is his fifth and most important of 2021 so far, as Foggia beat Jaume Masia (Red Bull KTM Ajo) to the line, with World Championship leader Pedro Acosta (Red Bull KTM Ajo) grabbing a crucial podium on the final lap.

Fantastic Foggia – a comeback for the ages!

Acosta, who was the only rider to opt for a harder rear tyre, calmly picked his way back up to P5 as the top nine started to break clear. Foggia was 12th on Lap 6, three seconds adrift of P1, but P12 no matter what happens with Acosta would take the title chase to Portimao. A lap later, Foggia was up to P10 and was at the spearhead of the second group, now the Leopard man had 1.3s to bridge to get on terms with the lead pack.

By Lap 10 of 23, Foggia had latched himself onto the back of the leaders, and he was joined by compatriot Andrea Migno (Rivacold Snipers Team). Then, on Lap 12, Acosta hit the front for the first time – with Foggia making his way past the other Red Bull KTM Ajo bike of Masia for P6. Acosta’s time at the front didn’t last long, and suddenly, on Lap 13, the title contenders were locked together in P4 and P5. Heading down the back straight, Foggia stormed past Acosta for the first time.

Lap 15 – Foggia led. The pocket rocket had picked his way through the pack expertly and grabbed P1 from Masia, as Stefano Nepa (BOE Owlride) picked off Acosta for P5 – the World Championship leader now P6, with his Lap 15 time a good half a second slower than Foggia on that hard rear tyre. A top four of Foggia, Masia, Guevara and Darryn Binder (Petronas Sprinta Racing) had formed, Acosta was behind 5th place Nepa and 1.7s down on Foggia with six laps to go.

Turn 8, on Lap 18, saw Guevara slide down the road unhurt – handing Acosta P5. A mistake from Nepa out of the final corner gave Acosta a chance of grabbing P4, which the number 37 took with open arms, but 2.3s was the gap between the title leader and his main rival. Acosta needed teammate Masia to do him a favour. And with three to go, it was Foggia vs Masia for victory – as Nepa passed Acosta again.

And so it was: last lap, Foggia vs Masia. Masia wasn’t close enough through Sector 1 and neither down into Turn 8. At said corner, Acosta grabbed a crucial P3 to get ahead of Binder and Nepa, with Foggia absolutely nailing the last lap. The Italian made no mistake to set his fastest lap of the race on the final lap, an absolutely astonishing ride from the number 7, as Acosta held onto a podium in P3. Wow! 21 points now split Acosta and Foggia heading to Portimao – game on in the title race.

Masia rode brilliantly to pick up his first rostrum since the Italian GP, one place ahead of teammate Acosta, as Red Bull KTM Ajo clinch the Moto3™ Team Championship. Binder lost out on a podium on the final lap, the MotoGP™-bound South African edged out Nepa by less than a tenth – the latter’s P5 is his best finish of the season. Antonelli claimed P6 after leading in the opening exchanges, compatriot Romano Fenati (Sterilgarda Max Racing Team) recovered to P7 from 19th on the grid.

Another twist in the tale! Foggia unearths a stellar Sunday ride to take the title to Portimao – a track where earlier in the year, Acosta beat Foggia by 0.051s. 21 points, two riders, one World Championship title – bring on the rollercoaster.

Algarve MotoGP: Espargaro: I don’t have the best of memories with Honda here | MotoGP

After making an impressive breakthrough in recent rounds, MotoGP rider Pol Espargaro is upbeat about his chances at Portimao despite not having great memories at the Portuguese circuit with Honda. Crash MotoGP Podcast – Click here to listen to Keith Huewen, Harry Benjamin and our own Pete McLaren talk MotoGP Espargaro took his first podium […]

Despite winning the 2021 MotoGP World Championship, Fabio Quartararo doesn’t feel like the number one rider and therefore won’t change to the #1 plate in 2022.  Crash MotoGP Podcast – Click here to listen to Keith Huewen, Harry Benjamin and our own Pete McLaren talk MotoGP In fact, Quartararo has decided against using the number […]

The Anglo-Thai racer beat Mercedes’ Daniel Juncadella to his first pole in the DTM during a wet qualifying session for the second race of the weekend on Sunday and converted it into the win in convincing style. Albon made a brilliant start and aced two Safety Car restarts on his way to clinching his first […]