Airbus A220 operators have been ordered to alert pilots to the possibility of premature rotation on take-off as a result of inadvertent autopilot engagement.

The warning is contained in an emergency directive from Transport Canada, which states that “several” events have occurred in which crews have accidentally activated the autopilot late in the take-off phase, or while trying to re-engage a disconnected autothrottle.

If the autopilot – which is not inhibited – is activated too early, it could command an increase in pitch to capture a pitch target, resulting in premature rotation.

This could occur even at speeds below the V1 decision speed, possibly causing the twinjet to become airborne with low energy or suffer a tail-strike if the take-off is not aborted.

“Premature [aircraft] pitch-up will require the crew to intervene immediately,” the directive stresses.

The autopilot would normally not be engaged below 400ft, as this is prohibited in the aircraft’s flight manual. 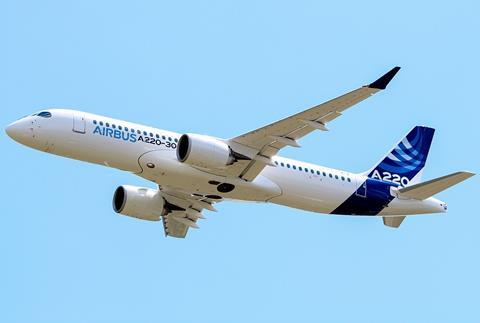 Airbus Canada, which manufactures the A220, has issued operational procedures for autothrottle selection, and instances in which the autothrottle disconnects on take-off.

“Operators should be aware that the autothrottle cannot be re-engaged if it becomes disconnected on takeoff above 60kt and below 400ft,” says the Transport Canada directive, which covers both the A220-100 and -300.

“Crews should not attempt to re-engage the autothrottle if it becomes disconnected on take-off as this may lead to an unsafe condition if the autopilot is inadvertently engaged.”

Operators have been instructed to amend the aircraft flight manual to include a warning over autopilot engagement on take-off, stating that it can result in premature rotation, tail-strike, an inability to climb or loss of control.

View Aviation Jobs in Oklahoma View and apply for aviation and aerospace jobs, send your resume and receive our jobs newsletter free. Avjobs is free for applicants, and – we offer advanced services to help you get to work faster. Avjobs has over 50,000 aviation companies and contacts in the aviation and […]

Who Does Antique Aircraft Repair for Museums?

Spartan College of Aeronautics and Technology is a prominent voice in the aviation space. These blogs are for informational purposes only and are meant to spark discussions within the aviation industry on a variety of topics. Aircraft restoration for museums is a great way to keep aviation history alive and to help younger generations appreciate […]