Norwegian investigators have criticised Airbus Helicopters for assumptions made during certification testing of its H145 that left examples fitted with an inlet barrier filter (IBF) vulnerable to engine failure due to ice ingestion.

Airbus Helicopters “did not do a thorough enough verification of their assumptions about the IBF system and if they were still valid during the certification process of the [H145] D2,” says Norway’s SHT air accident investigation agency. 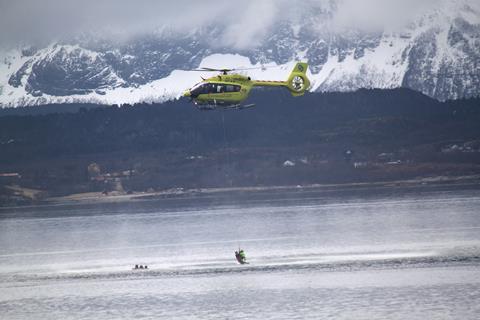 At issue are the changes between the C2 and D2 variants of the helicopter, notably more powerful engines, says the SHT in its final report into a dual engine flame-out on an H145 (LN-OOS) on 20 November 2021.

As part of its certification campaign for the D2 upgrade, Airbus Helicopters performed icing tests using an aircraft equipped with the standard “mushroom” air intake grid.

However, the SHT says “no such evaluation was performed” on an example fitted with an IBF system, as the “assumption was that the C2 testing was still valid”.

That judgement was based on the IBF being identical on both models.

In fact, Airbus Helicopters believed the installation of an IBF would decrease the risk of ice build-up thanks to a modified airflow path and proximity to hot engine components.

However, flight trials performed by the manufacturer in the wake of the Norwegian incident, showed the reverse was true.

The increased airflow from the more powerful Safran Helicopter Engines Arriel 2E turboshafts “lowers the temperature of the air stream”, says the report.

“This leads to the possible creation of a local area where the conditions for icing are present, even though the overall conditions are not conducive to icing.”

Airbus Helicopters conducted its testing in Bronnoysund, Norway from 10-26 January using a modified H145 D3 – the latest five-bladed variant – equipped with cameras and temperature sensors. However, the engine and IBF configuration were the same as those on the incident aircraft.

“The flight testing showed that ice can form in the IBF system and that this ice can enter the engine unhindered,” the report says.

Ice build-up was particularly noticeable on the underside of a grid that forms part of the bypass system which allows airflow to the engine to be maintained if the IBF starts to clog.

Testing showed that if the temperature varies, and rises above 0°C (32°F), “the ice can quickly melt on the contact surfaces leading to dislodging of ice or slush.”

“The results [of the tests] identified a risk of significant icing in the IBF system when the air temperature is between -5°C and 1°C with high humidity (snow, sleet, rain),” the report adds.

During the 20 November incident, the pilots of LN-OOS, an air ambulance, were performing a search and rescue mission for a party of lost hikers in the Botnfjellet mountains in the north of Norway.

Although icing conditions were not forecast, snow showers were present.

However, it took longer than the crew anticipated for the party in distress to reach the helicopter, during which time it had been hovering or on the ground with the engines running.

After embarking the hikers, the H145 took off to the east, turning southeast and travelling slowly along the Kongsvikdalen valley as the crew attempted to locate a powerline crossing in front of them.

As it proceeded down the valley, the left-hand engine suddenly shut down, forcing the pilots to make an emergency landing. While on the ground, the starboard engine also shut down without warning.

No technical faults with either engine or the fuel system were discovered during the SHT’s post-incident inspection.

However, visual inspection of both powerplants showed “soft [foreign object debris] damage” to their axial compressor blades, with the left-hand engine sustaining the most damage due to its higher rotation speed at the time.

The SHT believes both engines on LN-OOS “most likely stopped due a flame-out caused by the ingestion of ice”, probably shed from the IBF system.

In the aftermath of the event, Airbus Helicopters restricted the flight of IBF-equipped H145s in certain winter conditions, leading many operators to remove the filters.

But the manufacturer is also working on longer-term changes to the IBF, adding an extra grid to the air inlet tube and modifying the bypass door grid.

“Whether the selected improvement ideas are appropriate or will be successful in terms of removing the probability of ice accretion is to be verified by further flight-test campaigns,” the report adds.

Three South Korean low-cost operators continued their loss-making streak in the second quarter of the year, despite a steady increase in revenue. While Jeju Air, Jin Air and T’way Air all narrowed their losses, their financial performance stands in stark contrast to that of the country’s two full-service carriers Korean Air and Asiana Airlines, which […]