Propulsion system developer Ampaire has performed the first flight of a Cessna Grand Caravan modified to run on a new hybrid-electric powertrain.

Conducted from Camarillo airport, located to the northwest of Los Angeles, the 30min sortie of the “Eco Caravan” was designed to make initial evaluations of the parallel hybrid propulsion system. 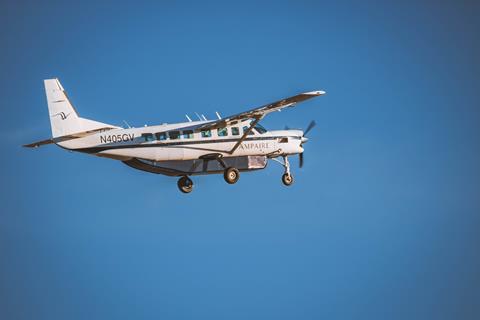 Flown by test pilot Elliot Seguin, the Eco Caravan (N405GV) was taken to 3,500ft at full power – combining the output from the combustion engine and electric system. Around 20min of the sortie was spent testing the aircraft at various power settings, while analysing temperature readings and other data, says Ampaire.

A low-power descent and landing was then conducted as the Eco Caravan returned to Camarillo.

Kevin Noertker, Ampaire chief executive, hails the sortie as a vital step towards the company’s goal of being first to market with the new powertrain technology.

“Launching hybrid-electric aviation is no simple task, but we have made it easier by upgrading an already certified aircraft,” he says.

Federal Aviation Administration (FAA) approval of the modification via a supplemental type certificate is targeted for 2024. Noertker describes this path as a “more efficient” approach than whole-aircraft certification and says Ampaire is “deep in the [application] process”.

“To our knowledge we are the very first to go through the application process for a hybrid-electric aircraft and so there is also the opportunity for [the FAA] to learn,” he says.

Noertker argues that Ampaire’s strategy of using “existing electrification technology” is the right balance of “aspirational goals and pragmatic approaches”.

In addition, the hybrid-electric architecture “mitigates most of the risks that you would see with the other approaches”, while the retrofit of current aircraft “is certainly an accelerant to achieving certification and providing useful products rapidly into the market”, he says.

To some extent that strategy of targeting the installed base is embodied by its test aircraft: a 2001-built example previously operated in Alaska under the Ravn Connect banner by now-defunct carrier Hagelund Aviation Services.

“It’s definitely the right approach in this industry to start with the existing assets and to upgrade them [and] to get it into the fresh-build variants of those planes so people can, off the factory line, choose a hybrid or a combustion variant.”

But a line-fit option for the powertrain would require an agreement with Textron Aviation, which owns the Cessna brand. However, Noertker declines to comment on the status of any discussions with the airframer.

“We anticipate working with OEMs like Textron Aviation, and there are other OEMs out there as well who have planes very well aligned with early adoption of hybrid systems.”

Ampaire is, he says, “building the operating system for electric aviation” which is “broadly applicable and quite scalable” to other aircraft types.

It has previously disclosed an interest in the De Havilland Canada DHC-6 Twin Otter – which it dubs the Eco Otter – and potentially the Beechcraft King Air, another Textron Aviation product. However, Noertker says the scalability of its powertrain means it is already considering larger FAA Part 25 aircraft for potential conversion and the possible partnerships needed to achieve those.

However, first it must prove the viability of the technology and business model with the nine-seat Eco Caravan.

Ampaire claims the hybrid-electric system cuts the cost of operation by 25-40% over the turbine-powered version, depending on the mission profile, and brings the cost per available seat mile to “near that of driving”.

As well as maintaining the seat count of the baseline model, maximum range with eight passengers is “beyond 1,000 miles” – further than the stock version.

To date, Ampaire has disclosed orders for 75 units, including most recently from Monte Aircraft Leasing for 25 aircraft, plus 25 options.

But Noertker says Ampaire has “a pretty solid backlog of folks who are at various stages in that [deal] pipeline, pre-public announcement, in the order of hundreds of units”.

Orders booked to date have been secured by deposits, he adds. In addition, the company has just embarked on a Series B funding round, although has yet to reveal an investment target.

Conversion and ground testing of the Eco Caravan has taken place at Ampaire’s base at Hawthorne Municipal airport in Los Angeles.

But due to the site’s proximity to LAX airport, flight-test activities are instead carried out at Camarillo, the aircraft having been partially dismantled and transported there by truck.

While the milestone sortie on 18 November was the first using the integrated hybrid-electric powertrain, the Eco Caravan has flown previously: flight-tracking data shows it performed a short mission of around 20min exactly a week earlier. Ampaire says this was solely with the combustion engine installed and was designed to validate that unit’s performance.

Ground tests of the aircraft did not reveal any surprises, says Noertker, but also allowed the evaluation of other features, such as its ability to charge the batteries using the electric motor. “We have proven functionality like that as well,” he adds.

Join us for Strategies in Light August 24th – 25th!

For years, Strategies in Light has been widely considered as one of the premiere events for the lighting industry. This year’s virtual event is two full days of live sessions, networking opportunities, and product demonstrations from industry experts. Also featured will be quick chats, including one by our own Chris Gordon, Product Scientist. Source link

Indian low-cost carrier SpiceJet will raise Rs25 billion ($336 million) to beef up its war chest against the coronavirus pandemic, which has battered its profitability.  The carrier discloses that the fundraising — subject to shareholder approval — will involve the placement of eligible securities to qualified institutional buyers.  SpiceJet managing director and chairman Ajay Singh […]