Amsterdam Schiphol airport has extended passenger capacity restrictions through to October, as it seeks to overcome the staffing challenges that have disrupted operations at the KLM hub.

The extension of the cap comes as the airport acknowledges “virtually all parties at the airport are [still] understaffed” – a situation that has caused long queues, delays, flight cancellations and baggage restrictions so far this summer. 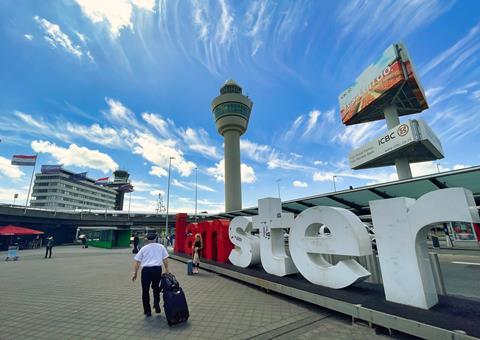 Schiphol notes that based on current projections, “in and around the two weeks of the autumn holidays, the expectation is that there will be an average of 3,500 too many local departing passengers”, meaning existing passenger bookings may be affected. The independent slot co-ordinator “will consult with all airlines to ensure that the number of passengers is appropriate in relation to the security capacity”, the airport states.

The fall in the cap going into September reflects the seasonal effect that comes with the weather turning colder, Schiphol explains. Travellers tend to “use more bins at security control after the summer because they wear more clothes”, it says, meaning it takes longer to perform required security checks.

While the airport says the number of security personnel available to it continues to increase, it does not comment on when it expects the operational disruption to be overcome. In part, that is because airports are not directly responsible for all of the points in the travel chain that are experiencing staffing shortages. Icelandair, for example, said in July that it was flying two baggage handlers – which tend to be the responsibility of airlines – on its Schiphol services in an attempt to overcome the lack of workers at the Dutch hub.

Air France-KLM chief executive Ben Smith said on 29 July that he sees some of the operational disruption in airline markets as a years-long issue, amid a lack of near-term fixes.

More Lockheed Martin F-35s are ready to fly in Japan. The United States Marine Corps (USMC) says its second squadron of the fifth-generation stealth fighters based in Iwakuni, Japan is now at full operational capability (FOC). The USMC flies the short take-off and vertical landing (STOVL) “B” variant of the F-35 from the Japanese base. […]

Canada’s Porter Airlines has ordered 30 Embraer 195-E2s and taken options to acquire a further 50 of the jets, while also announcing plans to expand to Toronto Pearson airport and to southern warm-weather destinations. The news marks a major fleet and network shift for Porter, an all-turboprop operator that has never served Pearson and that […]

Boeing’s latest 787 manufacturing issues and associated production cut has raised more uncertainty about the programme, leaving analysts unclear about production rates, the pace of regulatory approval and whether the airframer might take another financial charge against the programme. On 13 July, the manufacturer said it had discovered a new issue on the Dreamliner involving […]