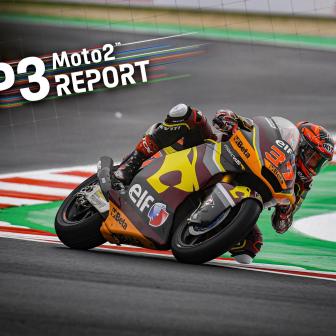 None of the Moto2™ riders improved their Friday times on Saturday morning at Misano; Gardner and Raul Fernandez safely into Q2

No improvements on Saturday morning

Unlike in the Moto3™ and MotoGP™ classes, the Moto2™ riders were unable to find any improvements in FP3. Home heroes Tony Arbolino (Liqui Moly Intact GP) and Marco Bezzecchi (SKY Racing Team VR46) were the top two split by just 0.003s in the Saturday morning stint, however, both Italians will be facing Q1 this afternoon.

Tune into Moto2™ qualifying at 15:10 local time (GMT+2) to see who comes out on top between Gardner and Raul Fernandez, as the intermediate class title race starts to sizzle up nicely.

For the fourth time in five races, Moto2 Red Bull KTM Ajo riders Raul Fernandez and Remy Gardner took a 1-2 for the team at Assen.  After suffering a crash in Sachsenring when second and on course to make it another 1-2 finish, Fernandez rebounded with a stunning Assen victory after recovering from ninth place.  […]

Th0mm0 will also be representing Australia for Suzuki Ecstar eSports Team , with Indonesian Ari TW running Petronas SRT Yamaha colours. Atok Awesome aka Syabil_bil10 is another Malaysian in this Regional Final. He will be riding for LCR Honda Castrol eSports Team. Malaysia’s MZ aka Muzamilzulkarnain will line up for Red Bull Tech3 KTM Factory Racing, with Syapixel 55 aka also from Malaysia, […]

Andrea Dovizioso may have enjoyed the greatest success of his MotoGP career with Ducati, winning 14 MotoGP races and finishing title runner-up three times, but it is memories of a previous bike that inspired his return to racing action from this weekend at Misano. Crash MotoGP Podcast – Click here to listen to Keith Huewen, […]