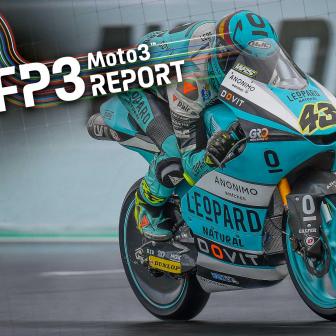 Wet conditions greeted the lightweight class on Saturday morning, with both title contenders inside the top 10

Conditions were by no means ideal for the Moto3™ riders in their final Free Practice session of the weekend, but for most of FP3, the circumstances enabled a lot of riders to improve their Friday times. Day 1 pacesetter Andrea Migno (Rivacold Snipers Team) wasn’t one of those though, as the Italian slipped to P12 – before crashing down at Turn 8 as the heavens opened in the final 10 minutes.

Importantly, Foggia – 23rd fastest on Day 1 – was able to climb to P10 before the rain began falling, but plenty of riders were still setting personal best times. Artigas went top of the pile on his final lap, Kunii also got the better of Surra to move into P2, with Foggia also setting his best time of the weekend on his last flying lap to grab P6 behind fourth place Filip Salač (CarXpert PrüstelGP) and fifth place Ayumu Sasaki (Red Bull KTM Tech3).

Don’t miss a single second of the action in the lightweight class, as Acosta and Foggia go head-to-head on Saturday afternoon to see who takes the advantage into Sunday’s race. Will it be wet, will it be dry? Tune in at 12:35 local time (GMT+2) to find out.

Verstappen maintained second behind Bottas at the start of the race, settling a couple of seconds behind him. The Dutchman dropped to over six seconds behind Bottas before switching to fresh intermediates on Lap 37. Mercedes responded with Bottas a lap later to cover off the threat of the undercut. With Bottas extending his advantage, […]

Norris: P7 the best McLaren could do in F1’s Turkish GP | F1

Norris endured a lonely race at Istanbul Park, running his own race in seventh. The McLaren driver did show impressive pace in the closing laps, closing up to the back of Lewis Hamilton and Pierre Gasly, before dropping back again when his tyres degraded.  “It was difficult because of the conditions,” Norris said after the […]