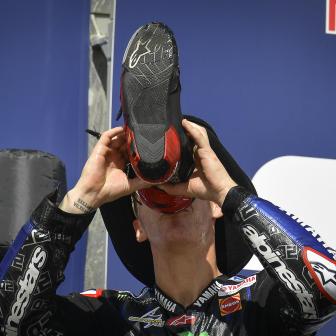 MotoGP™ returned to COTA for the first time in 30 months, and it didn’t disappoint…

Red Bull did not claim Hamilton-Verstappen F1 clash was deliberate

On Thursday ahead of the Hungarian Grand Prix, Red Bull saw its appeal to revisit the incident in an attempt to increase the 10-second penalty handed to Hamilton rejected. The stewards also noted “some concern” relating to allegations made by Red Bull in a letter included in its failed petition. Following a strongly worded statement […]

Another piece of the 2022 F1 grid fell into place on Monday as Alfa Romeo confirmed Valtteri Bottas as its replacement for the retiring Kimi Raikkonen on a “multi-year” deal.  The Finn’s departure paves the way for George Russell to graduate to Mercedes alongside Lewis Hamilton.  Last month, Red Bull announced Sergio Perez will remain […]

Perez and Latifi to start F1’s Dutch GP from pits

With the Mexican moving onto his fourth internal combustion engine of the season, surpassing the permitted limit of three power units for the season, he has triggered a grid penalty. Perez was expected to face a grid penalty for using too many engine components after his power unit was written off in the first-lap collision […]