NASA on 18 January disclosed having hired Boeing to develop the demonstrator, part of a project aimed at improving the fuel efficiency of future civilian airliners by up to 30%.

“It will definitely have a role to play some day in the narrowbody world,” Calhoun said on 25 January of the development programme. “There is real intent there”. 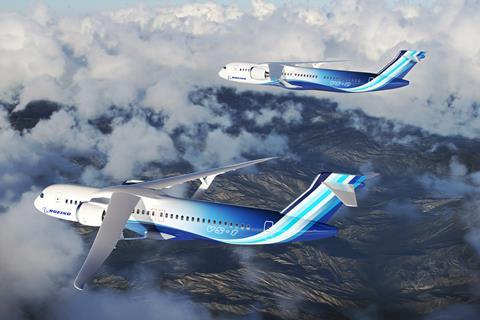 He adds that the truss-braced design is less promising for larger passenger jets, such as mid-market aircraft (comparable to 757s) or for widebody jets.

NASA plans to contribute $425 million towards Boeing’s development of the truss-braced demonstrator, while Boeing and other commercial partners are to shoulder the expected $725 million balance.

The design involves an aircraft with long, slender wings mounted high on its fuselage. Such designs are complex, though longer wings can reduce drag.

NASA says the demonstrator will make its first flight in 2028.

Some analysts have expressed scepticism Boeing will ever actually end up using the design for an in-production aircraft, noting that Calhoun has recently expressed no interest in jumping into new aircraft development.

“If Boeing doesn’t want a new jet, then this amount of money won’t change that,” says Richard Aboulafia, aerospace analyst with AeroDynamic Advisory.

Ron Epstein, analyst with BofA Securities, notes Boeing’s executives have said they are waiting for improved engine technology before moving forward with a new aircraft.

But Calhoun describes the Boeing-NASA partnership as a means of advancing a concept that both it and NASA have studied for years. He says the programme will help Boeing “commercialise” the truss-braced-wing design.

Calhoun also says a future new aircraft must be 25-30% more efficient than current models – an improvement that will likely involve use of higher-bypass-ratio turbofans.

Such engines would be wider in diameter than today’s turbofans but could possibly be accommodated by the truss-braced design’s high-mounted wings, Calhoun says.

European authorities have formally approved a hike in the Airbus A220-300’s maximum seating to 149 passengers, contingent on an overwing exit slide modification. The aircraft had previously been limited to 145 seats. Air France is planning to introduce its first A220-300 with a layout of 148 seats, due to be delivered to the carrier in […]

Boeing’s order activity ticked down in August following a strong July, with the company booking deals for 30 aircraft and logging cancellations for four jets. However, deliveries were up, aided by the resumption last month of 787 shipments following a hiatus lasting the better part of the preceding 22 months. It also managed to increase 737 […]

Frank Kendall was sworn in as the 26th secretary of the US Air Force (USAF) on 28 July at the Pentagon. A former USAF undersecretary of defense for acquisition, technology and logistics from 2012 to 2017, under President Barack Obama’s administration, Kendall was confirmed by the US Senate on 26 July. With the USA’s coming exit from […]