Japan’s two largest carriers are seeing a healthy boost in inbound travel demand following the country’s decision to ease travel restrictions a month ago, though they warn that China’s continued closure and economic headwinds will remain challenges.

Speaking to FlightGlobal at the Association of Asia Pacific Airlines (AAPA) Assembly of Presidents in Bangkok, senior executives from Japan Airlines and All Nippon Airways noted a “surprising” spike in forward bookings immediately after the reopening was announced. 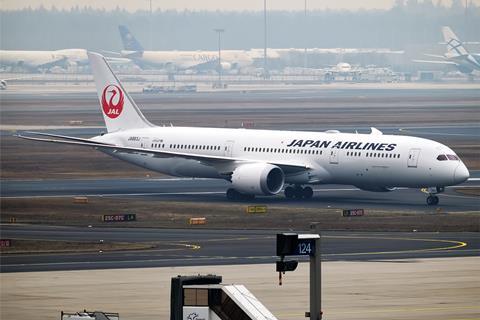 Japan fully swung open its borders on 11 October, doing away with restrictions such as pre-departure testing and quarantine for fully-vaccinated travellers.

As for ANA, forward bookings for flights to Japan spiked five times week on week and remain strong, according to international affairs and alliances executive vice-president Jun Miyagawa, who calls the increase “surprising”.

Consequently, the two carriers have adjusted upwards their international capacity projections, to about 60% by end-March 2023, which is the end of the current financial year.

A weaker Japanese yen is a double-edged sword for both carriers, the executives concede, with Japan an attractive – and more affordable – destination for inbound travellers, but with outbound leisure travel still in the doldrums.

ANA, meanwhile, is closing in on a full recovery on its North America network.

The demand is largely driven by transit traffic to and from other parts of Asia, especially iSoutheast Asia, both executives note.

On the other hand, JAL and ANA were both aware their large exposure to the Chinese market pre-pandemic meant their recovery would be slowed by the Mainland’s slower reopening.

Leggett adds that JAL is only operating only around 15% of the number of weekly flights into China compared to pre-pandemic 2019.

While there was relief at measures – announced by China on 11 November – to tweak some travel curbs, the executives point out that a full reopening will likely take some time.

China remains the last major economy to be largely shut out to international travel, thanks to its ‘zero-Covid’ policy. Despite eliminating a penalty system that punishes airlines for carrying passengers with Covid-19, the country has not adjusted upwards the number of international flights allowed in.

Embattled low-cost carrier Nok Air plans to inject fresh funds in 2022, to pay for “necessary capital expenditure”, as well as repay liabilities.  It comes as the Thai carrier clinched the crucial green light from Thailand’s Central Bankruptcy Court for its rehabilitation plan, which allows restructuring planners to execute the plan.  Nok, which first filed […]

The fledgling urban air mobility (UAM) sector has been boosted in recent months, with a slew of major orders for electric vertical take-off and landing (eVTOL) aircraft. Embraer’s UAM unit Eve clinched two significant orders within a week for its eVTOL aircraft – first from Halo, a helicopter and UAM travel provider in the US […]

Spirit Airlines’ shareholders will vote on whether to approve JetBlue Airways’ $3.8 billion bid to purchase the low-cost carrier on 19 October, according to Spirit’s 12 September filing with the US Securities and Exchange Commission (SEC). Approved by Spirit’s board of directors on 28 July, the deal calls for New York-based JetBlue to buy Spirit […]