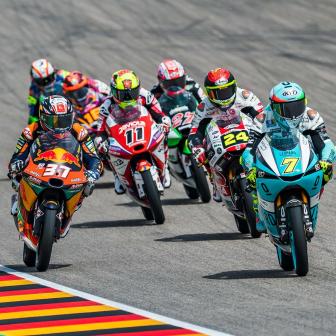 In the last three races, the average points scored by some of the key players make for a stark contrast. Foggia has averaged 22 points per Grand Prix, hence his move into second overall. Antonelli has taken 17, despite his injury struggles and Fenati, despite his crash out the lead at Misano and his dose of bad luck at MotorLand, still took an average of 9. Acosta, meanwhile, has taken just 4.67, and Garcia just 4.33. If a rate even close to that continues, its very much game on for Foggia for a title charge.

Is this the reason why Yamaha suspended Viñales in Austria?

Live updates from Friday’s pair of MotoGP free practice sessions at the Red Bull Ring!   The MotoGP World Championship holds its first back-to-back races of the season with teams and riders remaining at the Red Bull Ring for a second weekend. Crash MotoGP Podcast – Click here to listen to Keith Huewen, Harry Benjamin […]

Tsunoda suffered his latest Q1 elimination on Friday evening at Silverstone in F1’s new-format weekend, leaving him a disappointed 16th on the grid for the championship’s first-ever sprint race. The 21-year-old Japanese driver blamed being called to the weighbridge for a random check which he felt ruined his qualifying. Tsunoda found himself stuck in traffic […]