Jets from China’s People’s Liberation Army Air Force (PLAAF) crossed the into Taiwanese airspace over the Strait of Taiwan on 3 August, according to defence officials from the self-governing island.

The Minsitry of National Defense (MND) for Taiwan, formally known as the Republic of China (ROC), said on 3 August that six Shenyang J-11s, five Shenyang J-16s and 16 Sukhoi Su-30s belonging to the PLAAF entered ROC airspace at three different points along the so-called “median line” that serves as an unofficial maritime boundary in the Strait of Taiwan.

The MND incident report indicates that all three flights returned toward mainland China without incident following the incursions. Taiwanese air patrols armed with anti-air missiles were dispatched to the intercept the PLAAF aircraft, broadcast dispersion orders and conduct surveillance of their activity.

The sorties come less than a day after a high-ranking US official made a visit to Taiwan, which the People’s Republic of China (PRC) considers to be a breakaway province that falls under Beijing’s sovereignty.

Communist party authorities in Beijing vowed a military response to the visit by House Speaker Nancy Pelosi, who is third-in-line to the US presidency, and launched a series live-fire drills in the provinces nearest to Taiwan.

Under the so-called “One China” policy, the USA does not officially recognize the ROC as an independent country, but has maintained diplomatic and military ties to the democratic government in Taipei for decades, including billions of dollars in arms sales to the island’s military forces.

Although US President Joe Biden has recently stated on multiple occasions that his country would defend Taiwan in the event of a PRC invasion, the USA’s official stance on the matter of committing forces to such a conflict is deliberately vague, a concept known as “strategic ambiguity”. 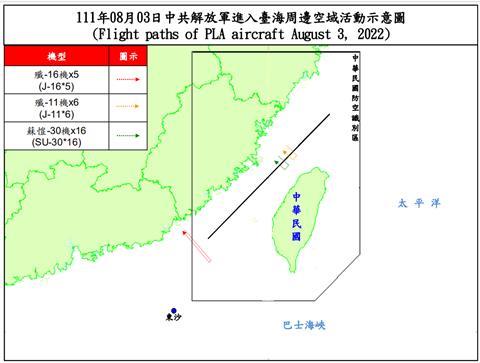 The PRC meanwhile, has been engaged in a years-long military build-up and modernization effort, including more aggressive probing of Taiwan’s air defences. While such incursions have happened for years, data from the MND shows that the number of Chinese military aircraft entering the ROC’s air defence interdiction zone on a monthly basis is increasing.

The latest military exercises announced by Beijing are described on 3 August as “unprecedented” by The Global Times, an English-language Chinese publication with close ties to the ruling communist party.

The state-affiliated newspaper reports that the PLA drills, which began on 2 August, will include the use of Chengdu J-20 stealth fighters, DF-17 hypersonic missiles and the firing of conventional missiles over Taiwan for the first time ever. Other aircraft noted as being involved in the drills are the Xian H-6K strategic bomber and J-11 fighter.

Citing authorities with China’s Eastern Theater Command, the Global Times report says that PLA forces will enter within 12 nautical miles of Taiwan, with the intent of surrounding the island entirely.

The PLA’s blockade, the Global Times quotes an unnamed official as saying, demonstrates “the Chinese mainland’s absolute control over the Taiwan question”.

The in-development CR929, jointly developed by China and Russia, is reportedly still on track to take off in 2025, as both countries look to begin construction of the first test aircraft next year.  According to a commentary published on Chinese news site Sina, China’s Comac and Russia’s United Aircraft “have reached an agreement” on design details […]

Air France-KLM will restore capacity to near pre-pandemic levels by what the airline hopes to be a strong peak summer travel season.  In addition, the European carrier says on 1 April it will join its SkyTeam alliance partner Delta Air Lines to introduce what it calls a “shuttle” service between Paris Charles de Gaulle airport […]