Skip to content
MUMBAI: Mumbai Police on Tuesday registered an FIR against actor Ranveer Singh for posting his nude pictures on social media, an official said. A Mumbai-based NGO and a lawyer Vedika Chaubey had approached the Chembur police with a complaint against the actor. Police registered the FIR under Indian Penal Code Sections 292 (sale of obscene books, etc), 293 (sale of obscene objects to young people), 509 (word, gesture or act intended to insult the modesty of a woman) and provisions of the Information Technology Act.

An office-bearer of the NGO had alleged that the actor hurt the sentiments of women in general and insulted their modesty through his photographs, police said. Advocate Akhilesh Chaubey, who represents the complainant, said Ranveer Singh was an “A list actor” whose films “are watched by youth who can easily get swayed by his actions. Here the photos are obscene and he seems to have done the photo shoot for money, he must be punished.”

Singh is the latest in the film fraternity to face legal action under the obscenity law. Others booked include Vidya Balan for her portrayal of Silk Smitha in ‘The Dirty Picture, Mallika Sherawat for a New Year’s eve performance and Shilpa Shetty for photos in a publication. 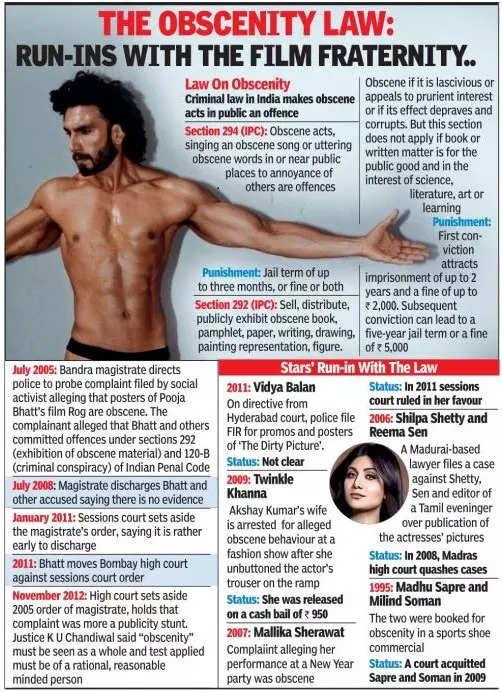 Senior counsel Niteen Pradhan said, “Police in Mumbai have overreached in registering the FIR against actor Ranveer Singh… it was not he who sought the publication (of the photos), it was the media who did the shoot, and even if he had voluntary published it on his social media account it doesn’t amount to an offence. And there is no compulsion on any person to view it…if anyone wants to understand what art is, they can always visit the Khajuraho temple.” Advocate Pranav Badheka said the FIR appears to be “frivolous”.

In the past, Bombay HC had set aside an order against actor Pooja Bhatt while ruling that “obscenity” test applied must be of a rational, reasonable minded person.

Senior counsel Amit Desai said, “Showing a bare body in the photograph as it is, should not under the law constitute obscenity. Nudity per se is not obscene and the photograph itself does not appear to be intended to be lascivious or to appeal to the prurient interest of any person as is the requirement of Section 292 Indian Penal Code for an offence of publishing obscene material. There is nothing on the face of it which shows that it tends to deprave or corrupt anyone’s mind either.”

Ad film maker Prahlad Kakkar said, “This complaint is of no consequence…how can it be when Ranveer Singh has posed for a New York magazine which isn’t meant for publishing here in India? I think the lawyer just wanted cheap publicity…it’s okay to go and touch the feet of a naked yogi in Kumbh Mela but they’re offended by a nude photo which is not even full frontal but a subtle depiction of nudity. What needs to change is the law and the description of what is considered obscene or lascivious.”

Tricoloured flags hoisted with pride, kites in the air and a spirit of patriotism and gratitude for the nation, Independence Day celebrations are a cherished moment for all of us. The date, August 15 holds special significance in the heart of every Indian as we commemorate the day to value and cherish the great courage […]

NEW DELHI: A new version of the Akash missile was successfully flight-tested on Monday from the integrated test range at Chandipur in Odisha, officials said. The missile – ‘Akash Prime‘ – intercepted and destroyed an unmanned aerial target mimicking an enemy aircraft in its maiden flight test, they said The flight testing took place at […]

DUBAI: Defending champions Australia will beat India in the finals of the T20 World Cup to lift the trophy, predicted two-time World Cup winning skipper Ricky Ponting. The 47-year-old has picked India and Australia as the finalists at the showpiece. The T20 World Cup is scheduled to be held in October and November later this […]