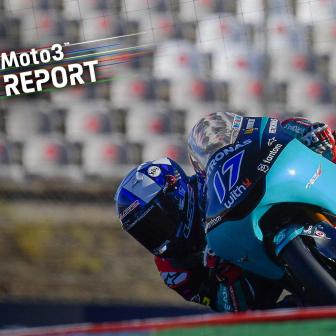 The British rider edges out the title-chasing Italian by less than a tenth; Acosta safely into Q2

No dramas so far for Foggia and Acosta

Earning automatic Q2 places would have been the prime objective for both of the title contenders so far this weekend, and it’s job done by both. Acosta slipped down the order as most of the riders – including himself – found time on Saturday morning, but the Spaniard will be happy enough with a P7. Meanwhile, only McPhee could find a way to go quicker than Foggia after Free Practice, with the man second in the Championship – once again – looking on song.

Friday pacesetter Romano Fenati (Sterilgarda Max Racing Team) was unable to improve his time in FP3, however, the Italian’s 1:48.026 was good enough to see him claim P4. Izan Guevara (MuchoNeumatico GASGAS Aspar Team) is fifth ahead of qualifying, and the Spaniard will be hoping to start as high up as possible as he faces a Long Lap Penalty in the race.

Acosta vs Foggia – who will gain the advantage in qualifying? Tune into a huge Moto3™ battle for pole position at 12:35 local time (GMT+0).

Romano Fenati continued his dominance at Silverstone with a controlled performance from the front to win the Moto3 British Grand Prix, round twelve of the championship, in style. Crash MotoGP Podcast – Click here to listen to Keith Huewen, Harry Benjamin and our own Pete McLaren talk MotoGP The race soon split into three distinct groups, […]