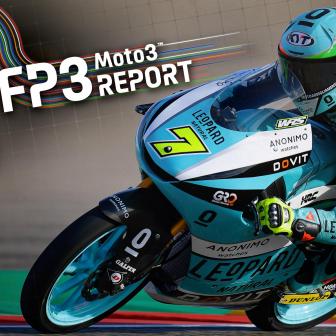 A fast and furious end to FP3

The first half of FP3 saw little improvement in terms of the combined times, with Binder and Foggia the only riders to go faster than they did on Friday with just under 20 minutes to go. However, with 15 minutes to go, that all changed. Guevara moved the goalposts to a 1:58.076 to sit 0.2s clear of teammate Sergio Garcia, as the latter suffered a small crash at Turn 9 just after going P2.

World Championship leader Pedro Acosta (Red Bull KTM Ajo) was P21 as the riders headed onto their final flying laps, as a flurry of personal best times were slammed in. Foggia went fastest ahead of Guevara with Garcia cementing his place in Q2 as well, before Acosta made sure he was heading straight into Q2 too. A good last lap from the Spaniard handed him P9.

So that’s it for Free Practice in the lightweight class, Moto3™ qualifying will get going at 12:35 local time (GMT+2).

Vettel, the four-time F1 champion, announced that he would retire at the end of the 2022 season leaving a significant vacancy for an Aston Martin driver. The team have now swooped to snap up Alonso, the two-time champion, who will leave Alpine at this year’s conclusion to link up with his new employers. Alonso, aged […]

Hamilton and tennis superstar Serena Williams pledged to invest £10 million to the takeover bid led by Sir Martin Broughton, the former Liverpool FC and British Airways chairman, but it is set to fail. The consortium led by Todd Boehly, the owner of baseball team the LA Dodgers who also has a stake in basketball […]

UPDATE: after the session, following a trip to the medical centre, Niccolo Antonelli was declard unfit for Sunday’s race, diagnosed with a fracture to his right hand. Crash MotoGP Podcast – Click here to listen to Keith Huewen, Harry Benjamin and our own Pete McLaren talk MotoGP Deniz Oncu took his first front row start in […]