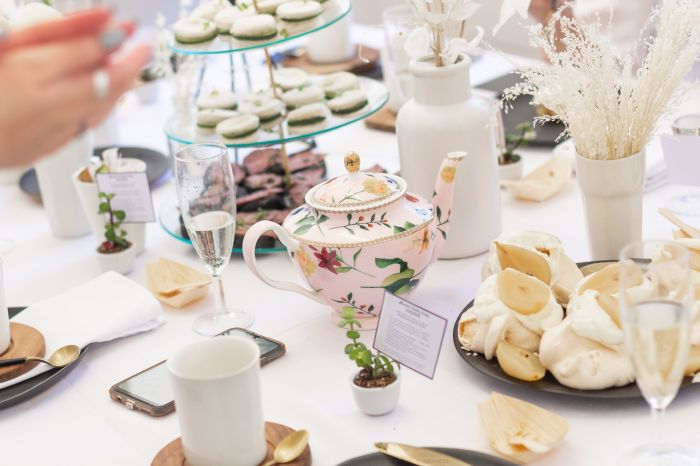 All Images Credit the Subject Featured

There’s something delightfully theatrical about slipping into evening finery mid-afternoon. From the first clink of bone china, tea-lovers re-enact the ritual of Victorian Britain, with the soundtrack of a well-tuned piano and the warmth of a well-buttered scone. Where better to become part of the performance than the tea capital itself? From glitzy classics to whimsical interpretations, here you’ll find our curated list of four of the most distinctive spots for afternoon tea in London. 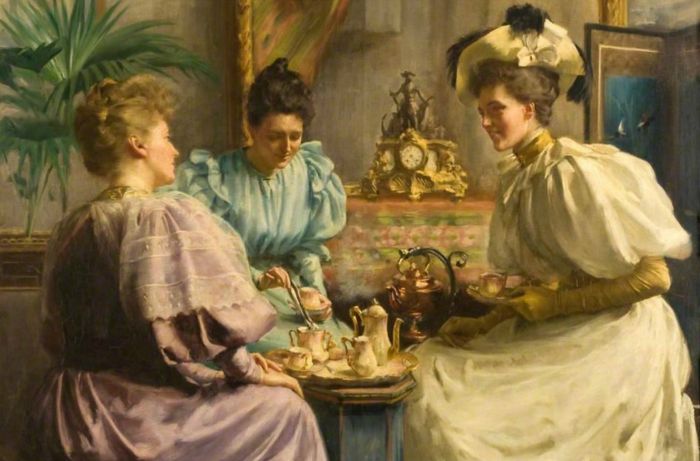 The concept of Afternoon Tea did not arise until 1840, when one woman experienced a mid-afternoon slump. With the evening meal becoming later and later, the Duchess of Bedford requested that a tray of tea and light refreshments be brought to her boudoir between meals. As she began to invite friends, a rumbling stomach became an afternoon ritual, spreading through social circles across England. The practice was relocated to drawing rooms and high-society gardens, complete with sophisticated dress codes and specific social customs. Whilst the world of coffee was reserved for men, tea became a feminine affair, where women could express identity, opinions and a dose of idle gossip.

Whilst today, afternoon tea is only an occasional indulgence, the practice has undergone a revival in recent years. There is a host of unique afternoon teas to explore, from themed affairs to champagne-based alternatives, London offers plenty of diverse and exquisite venues to indulge in a tower of treats.

The Savoy Hotel | Best for: Classic tastes with a twist. 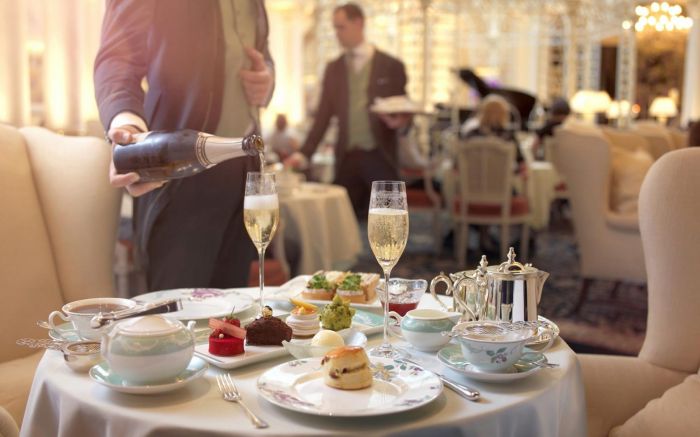 Considered Britain’s first luxury hotel, The Savoy is the obvious choice for tradition-seekers. Since its opening in 1889, afternoon tea has been a staple of the Westminster hotel, attracting pilgrims from Britain and beyond. The ceremony takes place in the radiant Thames Foyer, the glass-domed atrium where the infamous thé dansant is thought to have been invented. Here, suited staff serve light tea blends in floral bone china cups and saucers, whilst soft piano music enthrals you from a central garden gazebo. There are a range of over 30 brews on offer, from a syrupy ‘Red Dragon’ black tea to a tangy ‘Yellow Gold’ Oolong, known for its unique cleansing properties.

A generous menu takes guests on a journey through traditional British favourites. First comes the savoury, a classic selection of pillowy soft sandwiches, from English Cucumber to a lemon brioche filled with oak smoked salmon and light whipped cream cheese. Next come the scones, freshly-baked and served with lashings of tangy, buttery lemon-curd. The final course is the pièce de résistance, a platter of artistic treats designed by Executive Pastry Chef, Daniel Pearse. The handcrafted collection features an Amalfi lemon meringue shortbread, an Iranian pistachio praline and a creamy piedmont hazelnut cube. On request, the experience can be topped with a bright glass of Louis Roederer Brut Premier or Deutz Rose.

TING at the Shangri-La Hotel | Best for: Tea with a view. 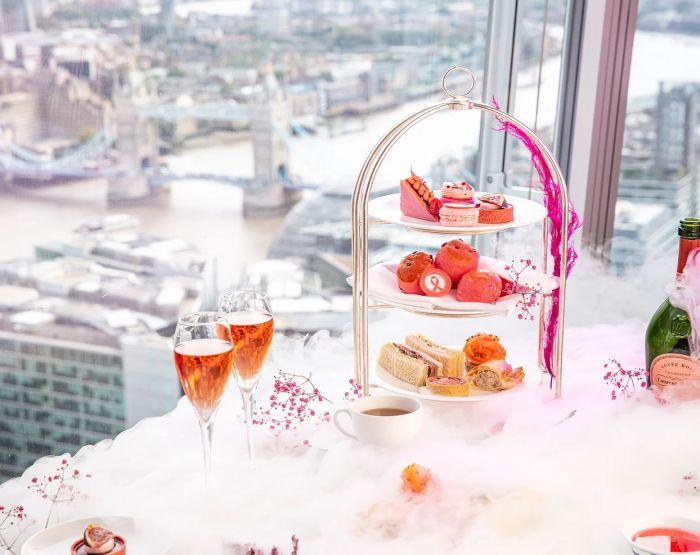 Swapping Victorian tearoom for contemporary skyline, TING at the Shangri-La Hotel serves afternoon tea 125 metres above-ground. Located on the 35th floor of London’s majestic Shard, the sleek lounge captures the essence of modern luxury, with low tables and plush armchairs angled to soak up spectacular views over the City of London. There are two menus to choose from: a traditional afternoon tea and its Asian-inspired counterpart. Themes are taken seriously here, with a meticulous eye for detail and staff who will advise the best tea blends for each bite.

TING allows each guest to choose their own menu, meaning that companions can enjoy both the classic and the oriental offering. In the latter, plump prawn dumplings and crab rolls replace duck-egg mayonnaise and peppered cucumber sandwiches.  Scones are served with a sweet gooseberry relish to revive taste buds. Both menus include imaginative desserts – from pink guava mousse to peach melba macarons – washed down with fruit-infused concoctions, or a glass of the crisp and distinctive Veuve Clicquot. Despite its cosmopolitan stance, TING gives a gracious nod to British tradition, using classic Wedgewood crockery to compliment the overall experience.

Alice at The Franklin Hotel | Best for: Quirky cakes and pastries. 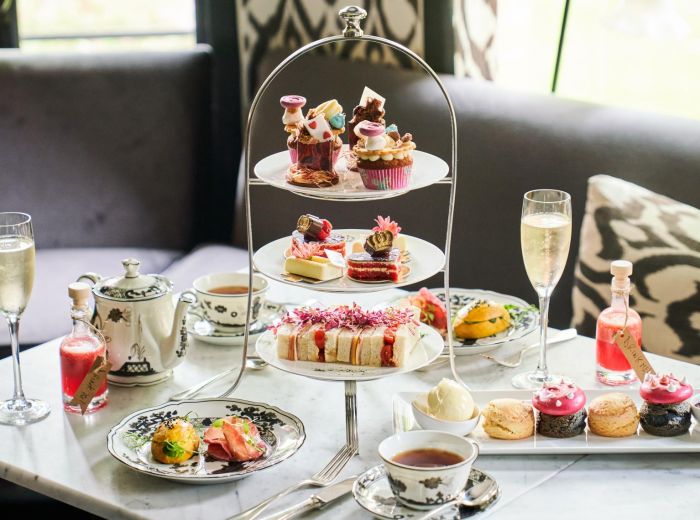 Camouflaged amongst the bronze buildings of Kensington, the purple flag of The Franklin invites guests down the rabbit hole for a unique and memorable afternoon tea in London. Inspired by the V&A’s Alice: Curioser and Curioser exhibition, Alice at The Franklin imagines what the adventurer’s ideal afternoon tea would look like today. Expect whacky decorations, nostalgic bites and a spread which will leave guests grinning like the Cheshire Cat himself. 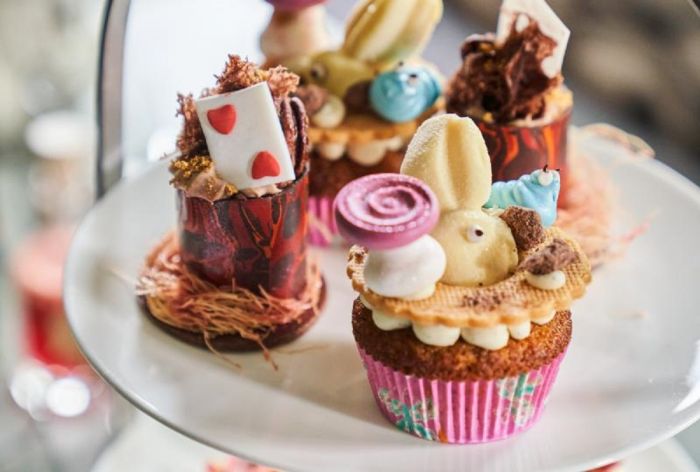 Despite the menu’s almost childlike edge, there’s nothing gimmicky about the flavors. Savory dishes include a vibrant beetroot pitta with burrata cheese and bresaola, and scones are of the blueberry variety, served with a meringue and berry compote. It’s the cakes themselves that receive the full Lewis Carrol treatment; from a carrot caramel cupcake, topped with a white chocolate rabbit, to a brownie top hat, using kataifi pastry and a soft pecan cream. There are six teas to consider, all developed specifically for the hotel by Camellia’s Tea House. Ticket options include a tea and exhibition bundle, meaning that guests can continue their stay in wonderland outside the hotel doors.

The Royal Horseguards Hotel | Best for: History-buffs and traditionalists. 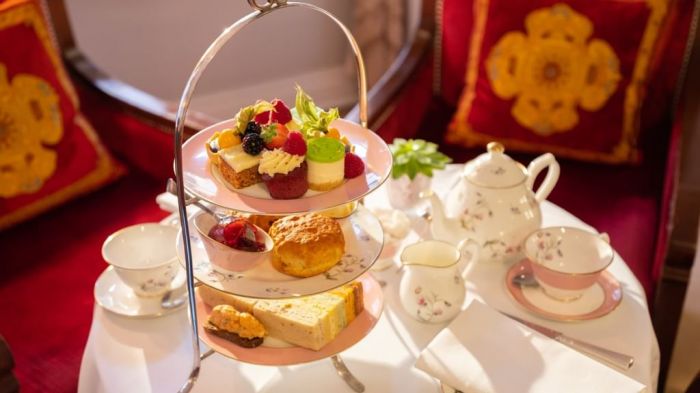 Sitting across from the London Eye on the banks of the River Thames, The Royal Horseguards Hotel is a quintessentially British institution. Once home to the first Chief of MI6, the 5 star hotel has been fully restored to its Victorian splendor, making it the perfect place to indulge in British tradition. Retracing the footsteps of some of England’s greatest writers and thinkers, guests can sink into the lush red velvet chairs of the hotel lounge for a right royal afternoon tea in London.

The food is as comforting as the interiors, served on delicate towers of pink and white crockery. Savory offerings feature honey roast ham sandwiches, whilst scones are accompanied by the all too familiar thick and sumptuous Cornish clotted cream and homemade preserve. For those who make it to the top, a selection of sweet treats – including a Marmalade Jammy Dodger and a Gooseberry Inside Out Victoria – awaits. The experience wouldn’t be complete without the collection of loose-leaf teas, including the hotel’s bespoke Strawberries and Cream house blend. 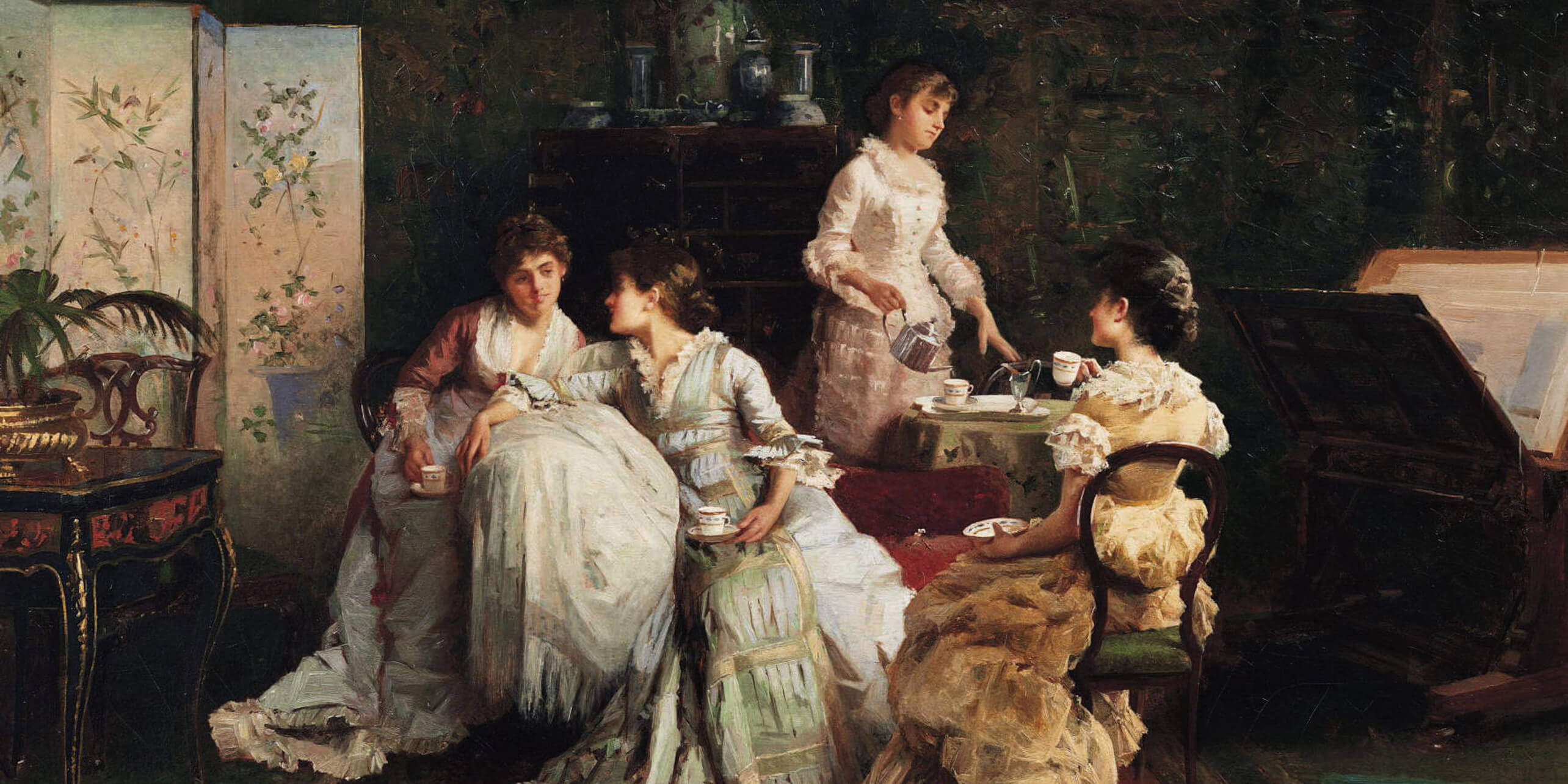 Over 150 years after its genesis, afternoon tea comes with a range of theatrics, including artistic menus, elegant ceramics and refined performers. With so many unique afternoon teas in London, visitors can choose the well-trodden path of tradition or take a lightly modernized sideroad. Whether its classic bites at The Savoy Hotel or a whacky spread at The Franklin, there’s a way for everyone to revive, or update, the famed British ritual.

Sequential Brands Group, Inc. has filed for Chapter 11 bankruptcy protection. The company, which owns the Jessica Simpson, Joe’s Jeans, And1, Avia and more brands, said in a press release that “significant debt on its corporate balance sheet” made it no longer able to operate its portfolio. Sequential struggled through debt and multiple executive shuffles […]

Noah and Vans Are Dropping a Five-Shoe Collection This Week

Vans has teamed up with Noah for a new sneaker collab and for the latest project, the two entities are giving two timeless silhouettes new looks under the premium Vault by Vans imprint. After delivering the animal-inspired OG Style 24 LX styles in April, the Anaheim-based skatewear brand and the New York City-based fashion label […]

Price: (as of – Details) This bra acts as a minimizer for fuller bust, this is the reason why it is loved globally. 100% cotton bra I designed for full covered and x support for that perfect comfort and fit, over an above broad elastic helps to support the bust in perfect shape which every […]