France has received the first of six Airbus Helicopters H160s to be operated on an interim basis by its navy for search and rescue missions.

This fleet will be delivered by a partnership formed by Airbus Helicopters, Babcock and Safran Helicopter Engines. 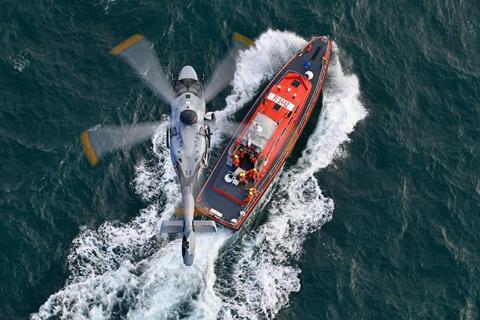 Babcock took delivery of the initial helicopter in May this year, modifying the medium-twin into what the manufacturer describes as a “light military configuration”.

Other changes include the adaption of the cabin for SAR operations and the integration of a Safran Euroflir 410 electro-optical system.

“The delivery of the first H160 to a military customer is a major milestone for the programme,” says Bruno Even, chief executive of Airbus Helicopters.

“Furthermore, the delivery takes place soon after two H160s entered into service this summer, in Brazil for the private and business aviation segment and in Japan for news gathering missions”, he says. Even notes that it is also the first of the type to be delivered in a public-service configuration.

Operations with the H160 will gradually ramp up at naval air stations in Lanveoc-Poulmic, Britanny and Hyeres, Provence, and Cherbourg airport in Normandy.

The new helicopters will provide interim search and rescue capacity while the navy waits for the delivery of a total of 49 H160M Guepards to be procured under France’s 169-unit tri-service HIL programme.

UK carrier Titan Airways highlights the diversification of its activities, including the introduction of Airbus A321 converted freighter operations, as driving a sharp cut in losses for the year ending March 2022 and bright prognosis for the coming year. Titan reduced its pre-tax losses from £16.3 million ($19.7 million) in its 2021 financial year to […]

Italy has formalised an order for six Piaggio Aerospace P180 Avanti turboprops for the country’s armed forces. Signed by defence minister Lorenzo Guerini on 1 October, the commitment is valued at €171 million ($198 million). The deal also includes the provision of a P180 full flight simulator and continued maintenance of the Rolls-Royce Viper engines […]

Singapore’s Changi Airport reported its strongest passenger traffic in more than two years during December, but has some way to go before it reaches pre-pandemic levels.  Operational data released by operator Changi Airport Group (CAG) shows the airport handling over 4.6 million passengers in December, or about 72% of pre-pandemic volumes. Of these, Southeast Asia accounted for the lion’s […]