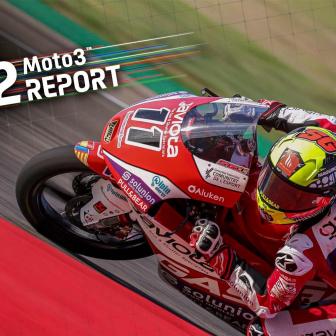 The returning Spaniard set a new Portimao lap record in Moto3™ to claim pole from McPhee; title leader Acosta has work to do on Sunday

Filip Salač (CarXpert PrüstelGP) set the initial benchmark time, a 1:47.811, to sit 0.008s clear of Ayumu Sasaki (Red Bull KTM Tech3) and Acosta, before FP3 pacesetter McPhee climbed ahead of the number 37 into provisional P3. After two flying laps, Foggia was P9 and 0.4s down on Salač’s fastest lap.

Lapping together, Sasaki, Acosta and Jaume Masia (Red Bull KTM Ajo) flew across the line with the latter going up to P4, ahead of teammate Acosta. But there were red sectors everywhere. Garcia was a staggering 0.7s under Salač’s time at the third split, and over the line, Garcia went P1 by half a second. Masia went up to P2 but Acosta’s last lap was cancelled, so the best he could hope for was P8.

Now, how damaging could Acosta running onto the green cost him? Foggia was sixth but on a personal best, and the Italian did go faster. McPhee slotted himself P2, Fernandez strung a fantastic final lap together to earn his maiden front row start in Grand Prix racing, with Foggia pocketing P4. Acosta, meanwhile, was left to rue his final lap cancellation – the World Championship leader will start P14.

Acosta’s teammate Masia will be hoping he can ruffle Foggia’s feathers on Sunday when the Spaniard launches from P5 alongside the Italian, but Foggia’s teammate Xavier Artigas (Leopard Racing) is P6 – a tasty looking Row 2.

Darryn Binder (Petronas Sprinta Racing) will spearhead Row 3 in P7, the South African has Q1 graduate Niccolo Antonelli (Avintia VR46 Academy) for company in P8, Salač slipped to P9 after leading in the early stages. Sasaki, who has a Long Lap Penalty to contend with, rounded out the top 10 in Moto3™ qualifying.

Acosta vs Foggia – we’ve been here before. The World Championship leader has his second match point of the season, 21 points is the gap, and victory for Acosta would hand him the title. P14 plays P4, what drama lies ahead on Sunday? Find out when the most important race of the season gets underway at 11:20 local time (GMT+0).

Joan Mir might not wait until next season to race the 2022 Suzuki GSX-RR chassis and instead use it in the remaining rounds of this year. Crash MotoGP Podcast – Click here to listen to Keith Huewen, Harry Benjamin and our own Pete McLaren talk MotoGP After evaluating the factory’s latest 2022 engine on Tuesday […]

MotoGP: Espargaro: I like to ride on the limit, only way of racing for me | MotoGP

Repsol Honda rider Pol Espargaro’ first nine races for the Japanese manufacturer have very much been a trial and error following the switch from KTM. Crash MotoGP Podcast – Click here to listen to Keith Huewen, Harry Benjamin and our own Pete McLaren talk MotoGP Espargaro is not alone in having an up-and-down season so […]

Verstappen managed third in qualifying at Istanbul Park behind the two Mercedes drivers of Lewis Hamilton and Valtteri Bottas, but with his main title rival serving a grid penalty for an engine change, he will start from second. The Dutchman struggled for pace during Friday practice, languishing six-tenths behind Hamilton in FP2. Reflecting on qualifying, […]