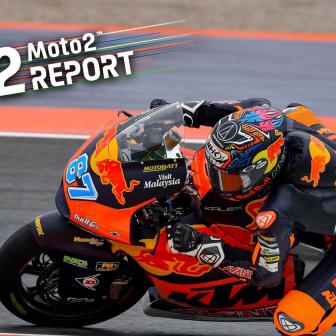 As we’ve become accustomed to seeing in Moto2™ this year, the Red Bull KTM Ajo duo were split by nothing at the top of the times

Day 1 of the Moto2™ title-deciding weekend is done and dusted and coming out on top by just 0.008s was World Championship leader Remy Gardner. The Australian’s 1:35.857 in a dry Gran Premio Motul de la Comunitat Valenciana FP2 saw him beat Red Bull KTM Ajo teammate and rival Raul Fernandez by that slender gap, setting us up nicely for the next two days. Augusto Fernandez (Elf Marc VDS Racing Team) completed the top three, the Spaniard was 0.041s down on Gardner.

Raul Fernandez was the pacesetter for most of the session as the riders were continually finding time on an ever-improving Circuit Ricardo Tormo. With just under four minutes to go though, Gardner took over at the summit by that 0.008s margin, as we witnessed a familiar looking sight at the top – Red Bull KTM Ajo 1-2.

On his final lap, Raul Fernandez returned the favour on Gardner to go back to P1, and that’s how it would finish – or so we thought. Raul Fernandez’ quickest time was chalked off due to exceeding track limits at Turn 12, meaning Gardner would end the opening day of action on top. Augusto Fernandez and rookie Celestino Vietti (SKY Racing Team VR46) got to within a tenth of the top time as 0.087s covers the top four.

Following’s Sunday’s Valencia season finale, MotoGP teams have travelled to Jerez for a two-day test and the last official track action of 2021. Takaaki Nakagami was fastest for Honda on day one, as he and LCR team-mate Alex Marquez tried out different versions of the 2022 RCV prototype, alongside their existing machines. Repsol Honda’s Marc […]

New MotoGP world champion Fabio Quartararo has frequently emphasised the need for Yamaha to address its top speed deficit to the Ducatis for 2022. Unfortunately for the young Frenchman, if such major engine updates are in the Yamaha pipeline, they won’t be arriving until next year’s Sepang test. Quartararo described the 2022 prototype seen during […]

The updated and attached guide provides a comprehensive look at the regulations, conditions, equipment, technical requirements and next steps for each FMN/CONU, promoter or interested party if they wish to be part of the FIM MiniGP World Series in 2022. This includes a recap of how each Cup must be run in order to be […]