“We can confirm that discussions among industry and governments on the next phase of FCAS have concluded, which represents a big step forward for this European flagship defence programme,” Airbus Defence & Space said on 18 November. 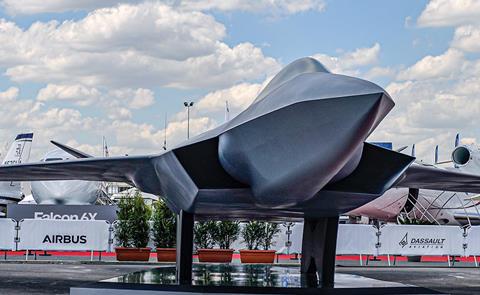 An initiative involving France, Germany and Spain, FCAS had been due to secure agreement on its Phase 1B by the end of 2021, but this schedule was delayed amid an industrial wrangle between Airbus and Dassault over the latter’s expected role as lead developer for a prototype New Generation Fighter platform.

“Now a number of formal steps in the respective countries have to be taken in order to allow a speedy contract signature which we will have to adhere to,” says Airbus’s defence unit – which also will lead Spain’s involvement. “We will provide further updates on the programme and the way forward in due time, once the contract between industry and the three nations is ready for final signature,” it adds.

“The political agreement on FCAS is a great step and – especially in these times – an important sign of the excellent German-French-Spanish cooperation,” says German defence minister Christine Lambrecht. “It strengthens Europe’s military capabilities and secures important know-how for ours, but also the European industry.”

She adds: “On the way to the air force of the future in Europe, it is once again clear that we can only master the enormous challenges together.”

However, while the German side has heralded the political agreement, neither Dassault nor the French defence ministry have yet commented on the development.

Plans call for the FCAS programme to deliver a system of new air combat equipment for service entry by 2040.

Embraer’s C-390 Millennium transport is one step closer to achieving certification for the performance of firefighting missions. The Brazilian airframer on 5 September said that it had completed the flight testing portion of the certification campaign for the C-390 equipped with the Modular Airborne Fire Fighting System (MAFFS) II payload. After certification, the firefighting capability […]

Spanish firm Iberia Maintenance is expecting to carry out work on its first Pratt & Whitney PW1100G engine next year, after securing servicing authorisation. Iberia Maintenance says it obtained the approval from the manufacturer of the powerplant, which is an option on Airbus A320neo-family jets. It says it has been working on obtaining the authorisation […]