LATAM Airlines Group and Delta Air Lines have revealed a host of new routes under a joint venture approved by the US Department of Transportation (DOT) in September, adding 23,000 seats weekly between North and Latin America.

Santiago-based LATAM said on 23 November that its Brazil subsidiary will fly thrice-weekly between Sao Paulo and Los Angeles beginning on 1 July 2023 and using Boeing 777s with capacity for 410 passengers. The route is currently not served, the airlines say. 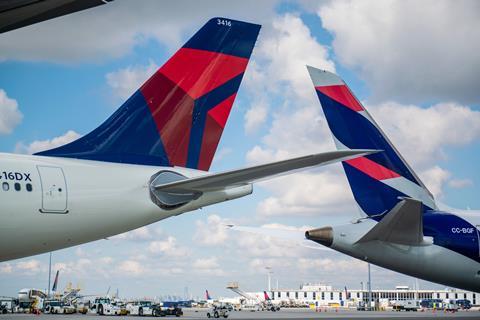 LATAM will be flying other routes more frequently.

Delta, meanwhile, is adding international and domestic flights, including from Atlanta to Santiago, Sao Paulo and Rio de Janeiro, and a New York-to-Sao Paulo daily flight. Even with the flights, Delta will still not operate the routes as frequently as it did in years before the pandemic, Diio data shows.

Delta will launch new daily service between Miami and Orlando, and Miami and Los Angeles, in December, the carrier says. The airline’s Atlanta-to-Lima connection will upgrade to an Airbus A350, adding more than 1,700 seats per week on that route.

In September, the DOT gave its long-awaited approval of antitrust immunity to the joint venture between Delta and LATAM, which the companies had pursued since mid-2019. It was approved by Chilean competition authorities in October 2021.

The partnership will see the carriers operate flights under each other’s flight codes between, within and beyond their home countries. It includes flights operated by Delta Connection’s US regional affiliates SkyWest Airlines, Republic Airways and Endeavor Air.

Australia has grounded its entire fleet of NH Industries MRH90 Taipan helicopters owing to sustainment issues. “Defence has temporarily suspended flying operations of the MRH90 helicopter fleet,” says Australia’s Department of Defence (DoD). “The fleet was suspended as a safety precaution. The issue relates to the application of the helicopter’s maintenance policy in the helicopter’s […]