In a filing with the US Securities and Exchange Commission (SEC) on 5 October, the Phoenix-based airline said the transaction was signed on 27 September. 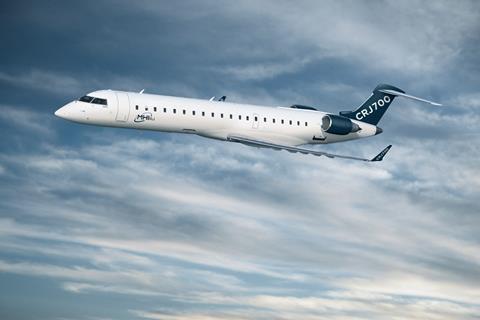 “Each aircraft will be delivered as is” and with a ”related lease agreement”, Mesa writes.

The SEC filing does not specify when Mesa expects to complete the sale, though it says purchase prices could be reduced if the sales extend beyond the end of 2023. Mesa did not immediately respond to a request for more information.

According to Cirium fleet data, the aircraft are owned by Mesa but operated by regional carrier GoJet Airlines, and have an average age of 19 years. Seven airframes are in service, and 11 in storage.

The deal comes weeks after one of United’s regional partners, Air Wisconsin Airlines, revealed plans to shift up to 60 50-seat CJR200s into American Airlines’ regional operation American Eagle. Air Wisconsin currently operates as United Express, but that agreement ends in the coming months.

American said it will take delivery of the Air Wisconsin jets between March and October 2023. Subject to the satisfaction of certain conditions, Air Wisconsin could accelerate the implementation schedule, however.

Location New Haven, Connecticut Wage Hourly Job ID 19008682323 Posted 2021-9-17 Description, duties, responsibilities To get the best candidate experience please consider applying for a maximum of 3 roles within 12 months to ensure you are not duplicating […]

GE Aviation and Tamil Nadu Industrial Development Corporation (TIDCO) will work together on aerospace research and development. The two have established a “Centre of Excellence” in the south Indian state that will focus on additive technologies, according to GE Aviation. The pair has previously signed a memorandum of understanding related to the project in 2021. […]

Russian investigators have disclosed that the Antonov An-26 involved in a fatal coastal terrain collision at Palana had originally conducted the overland approach to the airport’s runway 29. Federal air transport regulator Rosaviatsia, in preliminary findings, states that the Kamchatka Aviation Enterprise aircraft carried out a non-precision NDB approach to the runway following its flight […]