Skip to content
The recent bombshell hire and contentious tenure of Miami Police Chief Art Acevedo has sent shockwaves through the City of Miami’s government. It has also exacerbated ongoing tension between two of the Miami Police Department’s (MPD) most influential organizations, which have taken opposing stances on the provocative top cop.

In one corner is Miami’s Fraternal Order of Police (FOP), the department’s largest union (with around 1,200 active members) and the only organization with the power to bargain with the city. The FOP has openly denounced Acevedo, with 79 percent of its members voting in a recent poll that they don’t have confidence in the chief after he orchestrated a series of high-profile firings and suspensions.

“Our members are just tired, man. Myself included,” Sgt. Tommy Reyes, Miami FOP president, tells New Times. “The lack of fairness, equality, and justice that’s going on in the department is just sad. I feel like a dog being beaten over and over again.”

Opposite the FOP is the Miami Community Police Benevolent Association (MCPBA), a fraternal organization that represents officers of color, with roughly 100 active members within MPD. Members of the MCPBA showed up to last month’s special city commission meeting on Acevedo to speak in support of the chief. Its leaders not only laud Acevedo’s willingness to engage with the association but consider his staff shakeups a welcome departure from the cronyism of the past.

After all, it was Acevedo’s joke that his department was run by the “Cuban Mafia” during an August role-call meeting that put the Havana-born police chief in hot water with Cuban-American commissioner Joe Carollo, who was offended by the quip.

Decades before, Carollo had to resign as an officer from Metro-Dade Police (now Miami-Dade Police) after placing a Ku Klux Klan (KKK) cartoon in a Black officer’s mailbox.

#Miami Commissioner Joe Carollo was forced out of the Miami-Dade Police Department for putting a KKK flyer into a black officer’s locker, then campaigned for racist Dixiecrat George Wallace in 1986 via @orlandosentinel https://t.co/2S0Zow4ROl pic.twitter.com/3nSQSoXQbK

“My members feel like Acevedo is a breath of fresh air. Has he made mistakes? Yes. But he just got here,” Sgt. Stanley Jean-Poix, president of the MCPBA, tells New Times.

Acevedo (who was born in Havana) later apologized for the “Cuban Mafia” quip — admitting he was unaware that Fidel Castro had used the term to describe Cuban exiles who fled to South Florida as a way to alienate them from their heritage — but it seems that one organization of officers appreciates the chief’s willingness to call out ethnic disparities within his department, while the other does not.

While both unions have sparred in the past over who gets to speak for Miami’s police officers, the current schism hints at a much deeper racial divide within MPD, dating back to 1944, when Black officers were finally allowed to join the police department — albeit with different rights from their white counterparts: For example, they weren’t allowed to arrest white citizens without a white officer on the scene.

The latest clash between the FOP and MCPBA “may be a recent re-emergence of tensions between African-American officers and Hispanic officers,” says Marvin Dunn, historian and author of Black Miami in the Twentieth Century, which explores, among other topics, the presence of the KKK in early 1900s Miami and the Klan’s connection with Miami’s police force.

“We’ve had tensions for a long time between African-American police officers and Hispanic officers,” Dunn explains. “The widespread view in the Black community is that Hispanic cops are like cowboys, quick to pull a gun, and not knowledgeable about the community.”

Dunn tells New Times that several officers in MPD in the 1940s were members of the KKK, and many officers were rural, untrained men from Georgia who were supplied with billy clubs and sent to Overtown — then referred to as “Colored Town” — and Coconut Grove to police local Black communities.

Black officers were not allowed to join MPD’s motorcycle unit for years, under a directive by the police chief at the time that the unit would not become a “checkerboard,” Dunn says.

The MCPBA was founded in 1946 as the Miami Colored Police Benevolent Association by a group of black policemen. It was seen as a necessary platform to advocate for Black officers’ rights because Black officers weren’t allowed to join the local PBA at the time. It stands as the nation’s second-oldest Black police officers organization. 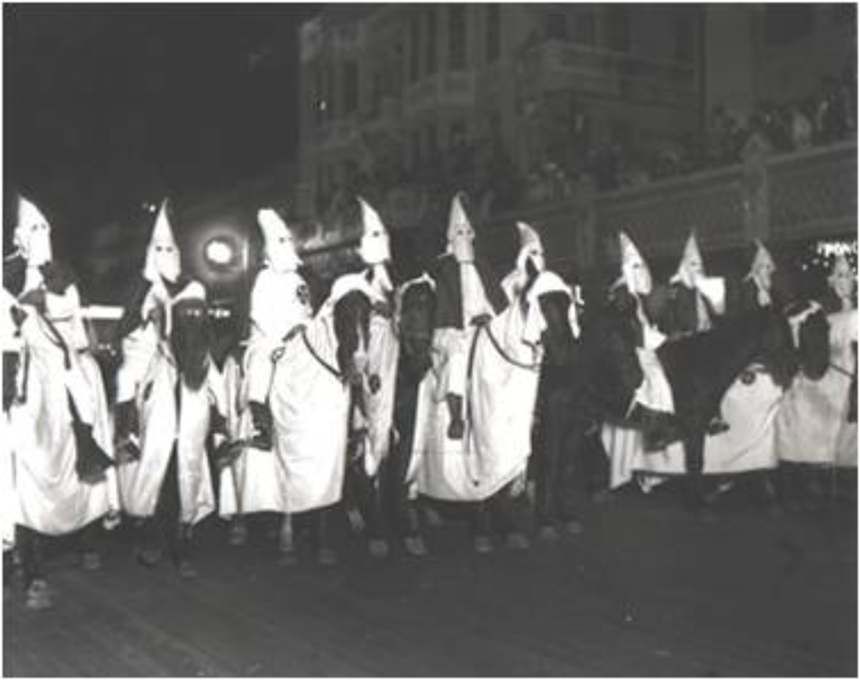 The Ku Klux Klan prepares to ride through Downtown Miami circa the 1940s.

The FOP now represents all non-executive -evel MPD officers, bargaining with the city for protections and benefits for its members and offering legal aid when officers are disciplined or fired. Members of the MCPBA, including Jean-Poix, are also members of the FOP.

The FOP union is named after former Miami police chief Walter E. Headley, Jr., who notoriously stated in 1967 that when the “looting starts, the shooting starts” — words later echoed by former President Trump.

The FOP has long held political sway in Miami government, with politicians sometimes cozying up to union leadership for endorsements and support from its sizeable voting bloc.

Reyes tells New Times the union takes offense at Acevedo’s reactionary approach to leadership, saying the chief is too quick to suspend or discipline an officer whose alleged misdeeds appear in the media, without due process.

“He doesn’t take into consideration how that [suspension] will affect that officer’s psyche or their family,” Reyes says. In the FOP’s estimation, Acevedo “cares more about his personal image” than about the department.

When asked about the MCPBA’s view of the new chief, Reyes is quick to establish the hierarchy between his group and theirs.

“They are not a union. They’re a fraternal organization that just happens to focus on officers of color. We [the FOP] represent everybody, no matter race, creed, color, or sexual orientation,” says Reyes, who is openly gay.

But that’s not always the case, according to Jean-Poix.

“The FOP tries to make it look like they speak for everyone but that’s the reason the MCPBA exists: They overlook our voices,” says Jean-Poix. “We need a voice for members who look like us.”

Jean-Poix says the reality is that the concerns of Black and non-Hispanic police officers are often pushed to the side.

On January 17, 2020, members of the MCPBA went before the city commission to accuse then-Chief Jorge Colina of neglecting their complaints of racial discrimination and disparity in promotions and discipline between Black and non-Black officers.

Three days later, when the Black police association attempted to meet with Colina at the commission’s urging, the FOP seemed to block the group from speaking to the chief, according to a January 20, 2020, email shared with New Times. In the email, FOP attorney Eugene Gibbons tells Colina that because the FOP is the only organization with bargaining power, he should not negotiate with the MCPBA nor discuss concerns about benefits or terms of employment, and threatened legal action.

“Florida law requires that any collective bargaining negotiations must go thru [sic] our organization only and any attempt to negotiate or change any job benefits of terms and conditions of employment with or by any other employee organization would be a clear and flagrant unfair labor practice,” Gibbons wrote in the email. “We trust the City will govern itself accordingly.”

Reyes tells New Times that police chiefs are welcome to meet with the MCPBA to hear their concerns, but they should not negotiate over anything within the purview of the FOP contract.

“I think they’re a great organization with a great cause, and they’re a much-needed organization,” Reyes says. “But there’s only one union in MPD, and that’s the FOP.”

In June of 2020, an incident from Colina’s days as an officer in 1997 came to light, in which he allegedly used the N-word during a law-enforcement training session, referring to Overtown as “Niggertown.” The MCPBA called for Colina’s ouster. When reached for comment by New Times, Colina denied the allegation, calling it “outrageous” and “disgusting.”

“It’s always been hard to be a Black police officer,” Jean-Poix adds. “You have to balance both groups: the law-enforcement community and the Black community. Once I get off work, I’m just a Black man in whatever car.”

August 19, 2021 Please Always Remember to Drink Responsibly 1. The First Sip What it feels to like to be drunk The First Sip is when you know it is go time. When that first drop of delicious alcohol hits your tongue, your mind and body are taken to another place. You are ready to […]