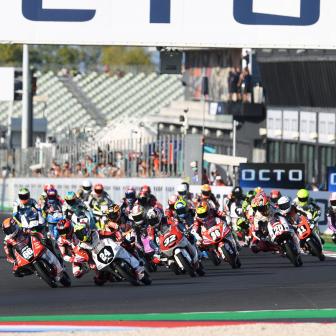 The Permanent Bureau has worked closely for many years with all Road and Circuit Racing stakeholders, including IRTA and the MSMA, towards creating the safest sport possible. Whilst all parties, and fans, are conscious that motorcycle racing is dangerous, all bodies are committed to continued improvement and evolution, making it safer every day and ensuring that the sport continues to grow on a global scale.

Via a process of constant review and revision, this commitment from the Permanent Bureau and all those within the sport goes back various decades, in close collaboration with the riders themselves in the Safety Commission, and has already resulted in significant improvements to safety within motorcycle racing. To build on this progress, additional safety regulations and improvements will now come into force in four key areas, aimed at further minimising the risk of motorcycle racing as much as possible. These key areas are minimum age limits and entry list sizes for each series, alongside projects in development concerning improvements in rider equipment and rider communication.

In coming seasons, the number of competitors on track in each series will be limited as outlined below. In addition, new age limits for each class, series or Championship will come into force. These age limits will be introduced as part of a policy to be implemented worldwide, with the FIM committed to ensuring they are also adhered to by National Federations and Continental Unions, to make a discernible difference to the sport at every level.

Raising the minimum age for each category of motorcycle racing is a decision taken in order to ensure a safer pathway for all riders beginning and continuing their careers.

In addition, increasing the age limit for certain categories will enable greater parity between different countries and continents, helping to increase accessibility by levelling the playing field and ensuring each rider is able to gain similar experience in different categories around the world.

The Talent Cups, which are organised and/or supported by Dorna, such as the European, British, Northern and Asia Talent Cups, as well as pre-Moto3™ series, will raise the minimum age to 13 and there will be a maximum of 30 competitors on each grid.

The minimum age for competitors in the Red Bull MotoGP Rookies Cup will be raised to 14.

The FIM Moto3™ Junior World Championship in the FIM CEV Repsol will see the minimum age limit raised from 14 to 15. A maximum of 32 competitors will be permitted in each race.

In the WorldSSP300 class in the MOTUL FIM Superbike World Championship, the minimum age limit will be raised from 15 to 16. A maximum of 32 riders will be allowed to line up on the grid.

For the 2022 season, there will be an exception granted for riders who have already entered in the same class in 2021 to allow them to continue to race.

For 2023 and thereafter, the proposal is to raise age limits further as follows:

A minimum age of 14 should be applied to all racing at any Grand Prix-type circuits, including all those that have or have had Grade A, B or C homologation, which will include the Asia, British, European and Northern Talent Cups.

The minimum age for competitors in any class in the FIM MotoGP™ World Championship will be raised to 18. This includes for Moto3 and Moto2, for which the age limit is currently 16.

The winner of the FIM Moto3 Junior World Championship and/or the Red Bull MotoGP Rookies Cup will be allowed to join Moto3 at 17 years of age. For the 2023 season only, there will also be an exception granted for riders who have already entered Moto3 in 2022 to allow them to continue to race.

The FIM Moto3 Junior World Championship and the Moto2 European Championship, both in the FIM CEV Repsol, will have a minimum age limit of 16. The Red Bull MotoGP Rookies Cup will also increase the minimum age by one more year to 15.

With the same philosophy as that applied in 2022 (for riders who have already competed in 2021), an exception will be granted to riders already participating in the Talent Cups in 2022 to allow them to continue to race in the same class in 2023.

The minimum age for competitors in the WorldSSP Championship will be raised to 18.

From 2022, airbags will be compulsory in all Sprint Circuit Racing FIM championships.

For the FIM Sidecar World Championship, tests are underway to determine whether the known algorithms are valid for passengers. These tests will make it possible to know whether the airbag can be used by all participants from 2022.

Rider safety equipment has improved significantly throughout the decades and continues to do so thanks to improvements across the industry, from leathers, gloves, back and chest protectors and boots to FIM homologated helmets and innovative airbag systems. It has never been safer to ride a motorcycle at speed and these improvements help to protect a rider from injury, in many instances helping to save lives whilst not compromising rideability, which is also intrinsic to on-track safety.

A first meeting took place at the Aragon GP between all partners, including leather and helmet suppliers, technical staff and medical personnel, on the next step towards improving the level of protection afforded by rider equipment, with increased focus on protecting competitors against an impact from another rider or motorcycle, particularly the chest and neck.

All parties are committed to making improvements in these areas and meeting this challenge as safely and as quickly as possible whilst ensuring the high level of current protection is not compromised.

The next step to increase the safety of all those on track will focus on communicating to a rider or bike that a crash has taken place ahead as soon as possible.

A first meeting between all partners and technical suppliers has already taken place in order to discuss the installation and implementation of the required technology in rider equipment, on motorcycles and/or around each circuit, the aim of which is to implement automatic, near-instant warning systems for all following riders/motorcycles. The first tests will start as soon as the beginning of the 2022 season, and the system must and will be applicable to Championships of all levels, including Talent Cups.

Hosciuc takes maiden win in style at the Cathedral

Since leaving McLaren at the end of 2012 to join Mercedes, Hamilton has gone on to become statistically the most successful F1 driver of all time, racking up the most wins, pole positions and equalling Michael Schumacher’s record of seven world championships.  Vergne, who competed in F1 with Toro Rosso between 2012 and 2014, argued […]