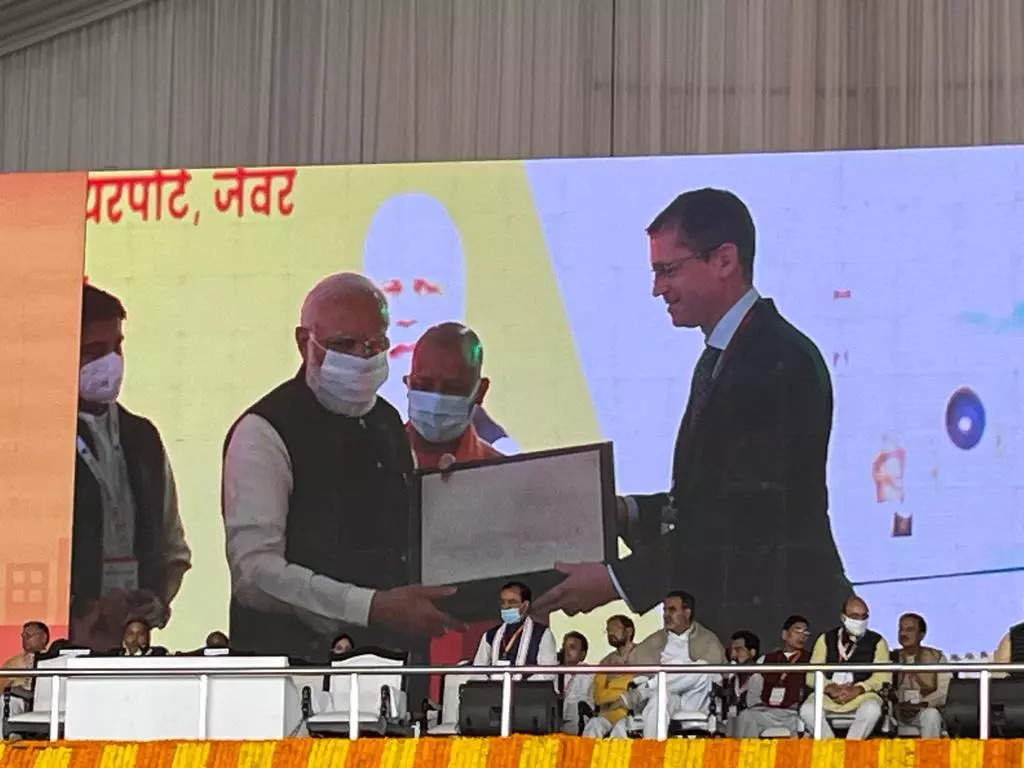 The ground-breaking ceremony for Noida International Airport (NIA) was held at Jewar on Thursday in the presence of Prime Minister Narendra Modi, and the Chief Minister of Uttar Pradesh, Yogi Adityanath. The ceremony marks the beginning of construction of the biggest airport in Asia and overall, fourth largest in the world when completed. Built through a Public Private Partnership (PPP) with an overall investment of INR 5730 crore, it is set to open in September 2024. The country’s newest greenfield airport passengers a safe and contactless travel experience as well as customised commercial offerings being a digital airport. It also aims at operating with net zero emissions at an early stage. NIA will also facilitate air traffic along with rapid growth in tourism.

Noida International Airport is planned in 1334 hectares area at Jewar in the Yamuna Expressway International Development Authority (YEIDA) in Gautam Budhha Nagar. The airport will be strategically located at about 72 km from Indira Gandhi International Airport, about 52 kilometers from Noida, about 130 kilometers from Agra and about 90 kilometers from Multi-Modal Logistics Hub at Dadri. The project will be completed in 4 phases. As per Concession Agreement, first phase for 12 million passengers per annum is to be completed and made operational within 1,095 days from the appointed date by September 29, 2022.

For the Jewar airport all clearances and NOCs have been obtained. Land acquisition has been completed. The Concession Agreement for the project was signed on October 7, 2020, and financial closure has been achieved August 10, 2021. Master Plan for the development of the airport has been approved and rehabilitation and re-settlement has been completed. The masterplan is prepared to accommodate the expected demand throughout the 40-year concession period with two runways and two passenger terminals. 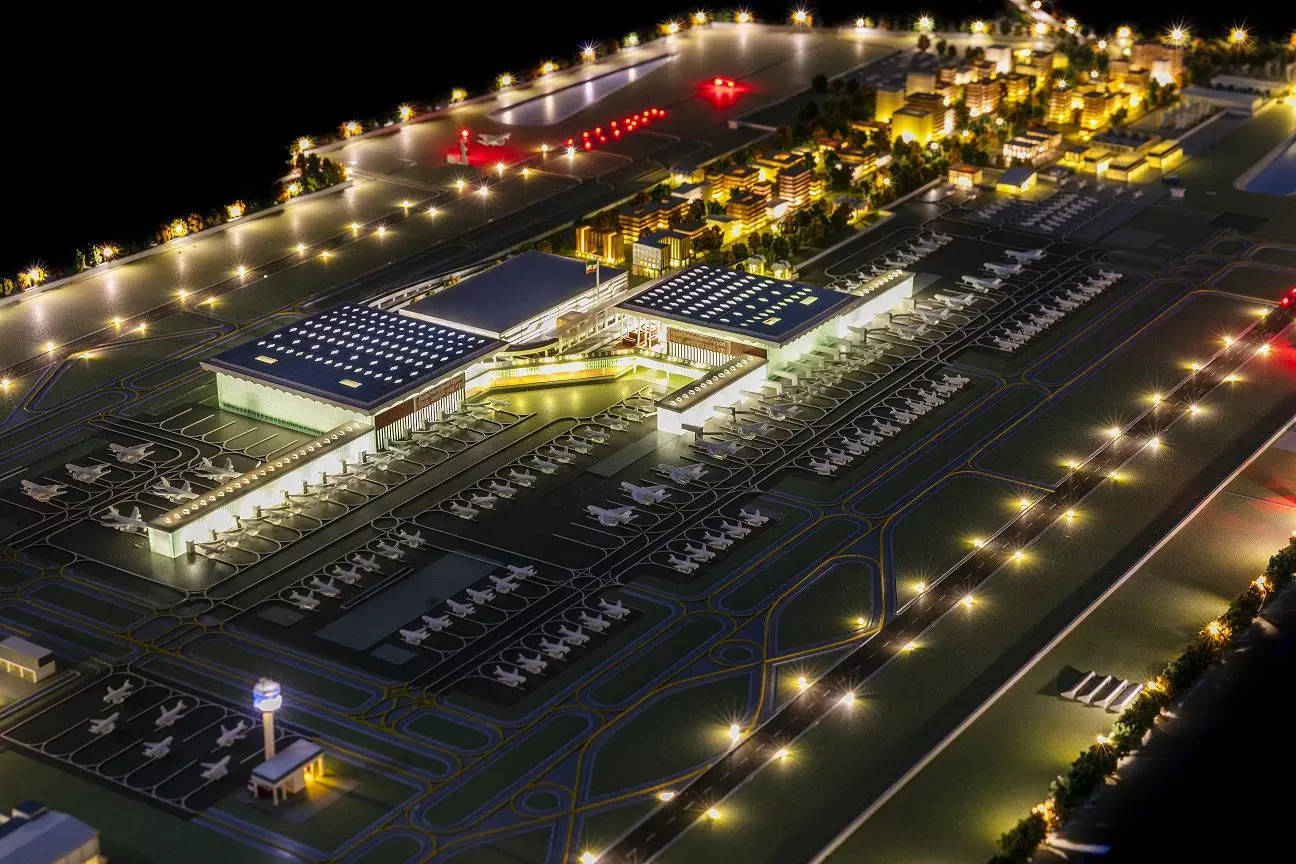 Addressing the gathering, the Prime Minister after laying foundation stone said the new India of the 21st century is building one of the best modern infrastructures. “Better roads, better rail network, better airports are not just infrastructure projects, but they transform the entire region, transforming people’s lives completely”, he said. PM Modi said that Noida International Airport will become the logistics gateway of northern India and will make the entire region a powerful symbol of the National Gatishakti Masterplan. Commenting on the economic fallout of infrastructure development, he said that employment opportunities are created during airport construction. He also said the airport will play a major role in the growing aviation sector of India and will become a key centre of maintenance, repair, and operations (MRO) of aircrafts.

On the occasion, Daniel Bircher, Chairman and Managing Director, Yamuna International Airport Private Limited (YIAPL), the SPV developing the airport, said, “The ground-breaking ceremony is a key milestone, and the airport will act as a growth catalyst for not just the state, but the country. As the Ministry of Civil Aviation turns its focus towards making India a global aviation maintenance hub, NIA will aid the development of Cargo and MRO cluster in the NCR region, making flying more affordable. We are a committed partner for India’s growth, and we see tremendous opportunity to invest and support India’s national agenda through infrastructural development and job creation.”

Work on the first phase is expected to be completed by 2024 as the Noida International Airport becomes country’s first net zero emission airport and providing multi-modal seamless connectivity with an integrated cargo hub.

At the ground-breaking, Christoph Schnellmann, Chief Executive Officer, YIAPL said, “The strong recovery in the aviation sector along with the government’s initiative to develop and expand airports will not only help meet the growing demand for travel but also encourage higher connectivity between tier 2 and 3 cities in the country. Noida International Airport will connect western Uttar Pradesh to other cities in India and the world. This world class airport will set a benchmark in aviation infrastructure and development of multiple-airport systems in India.”

The airport’s design is inspired by India and will include various elements synonymous with the region’s architecture. The terminal forecourt will feature flights of steps like the famous ghats of Varanasi and Haridwar, welcoming and bringing together people. Delivering the look and feel of a haveli, a courtyard will allow fresh air and sunlight into the terminal building. Inspired by the important rivers of the region, a white, translucent, wavy roof will give the effect of a flowing river. The passenger terminal will feature intricate ornamental lattice screens, inspired by Indian architecture.

British Airways expands the use of the Verifly app – Business Traveller

British Airways is expanding the use of the Verifly app. The airline says that over 500,000 customers have successfully used the pass “to make sure they have the right documentation ahead of their flights.” The opening up of US flights for UK and European citizens from November 8, 2021 will increase the use of the […]

Even as Emirates had started accepting flight bookings post July 16, the Dubai-based carrier has now confirmed that flights to Dubai will be further suspended till July 21. The airline is currently accepting booking from July 22 onwards. In response to a query from a passenger, Emirates Support has tweeted, “Our flights from India are […]