Skip to content
Let’s all agree on one thing: no more prognosticating what the new year is going to be like or saying “I know this one will be better than the last.” We learned our lesson.

While the nation saw the inauguration of a new president after a heated election, a historic insurrection on U.S. soil, and a virus that won’t stop morphing into new, more infectious variants, South Florida experienced its own breed of strange and ridiculous antics from the men and women who populate the weirdest state in the union.

Whether they’re lingerie-wearing anti-maskers, toddler punchers, or rich swingers, they don’t always make us proud, but they sure make for a good story.

Without further ado, here are seven of the most ridiculous South Florida man and woman stories from 2021.

“Adam Jenne — who compared himself to civil rights icon Rosa Parks — said that he had previously worn a thong as a mask on several previous flights” pic.twitter.com/9ZnXWf6eeq

Catching a flight is a hassle in a normal year, and the pandemic has only served to make things more tedious, albeit in the name of safety. Now imagine you’re in your seat, wearing your facemask, waiting for the plane to take off when some grown-ass man wearing a pair of red panties on his face picks a fight with the flight crew.

The South Florida man was promptly removed from the plane and banned from flying with United Airlines in the future. He reportedly hopes “Spirit has a better sense of humor.”


Miami police have released surveillance video allegedly showing Marvin Green, 27, punch a 3-year-old boy who was waiting in line at a Walgreens pharmacy with his mother.

Green has not been located. pic.twitter.com/mpb6wBhysx


A man vying for Most Hated Person Alive aggressively sucker-punched a 3-year-old out of nowhere at an Allapattah Walgreens, according to surveillance camera footage from inside the store.

Miami police arrested 27-year-old Marvin Green, who they believe to be the perpetrator of the outrageously cruel and random attack. Officers later treated the little boy to a light show in the MPD’s tricked-out slingshot to cheer him up.

Green, meanwhile, went before a judge Monday and was charged with aggravated child abuse and hit with a $23,000 bond.

While we don’t condone picking on anyone, surely if this Florida man felt like slamming an innocent Walgreens patron, he could’ve picked on someone his own size. 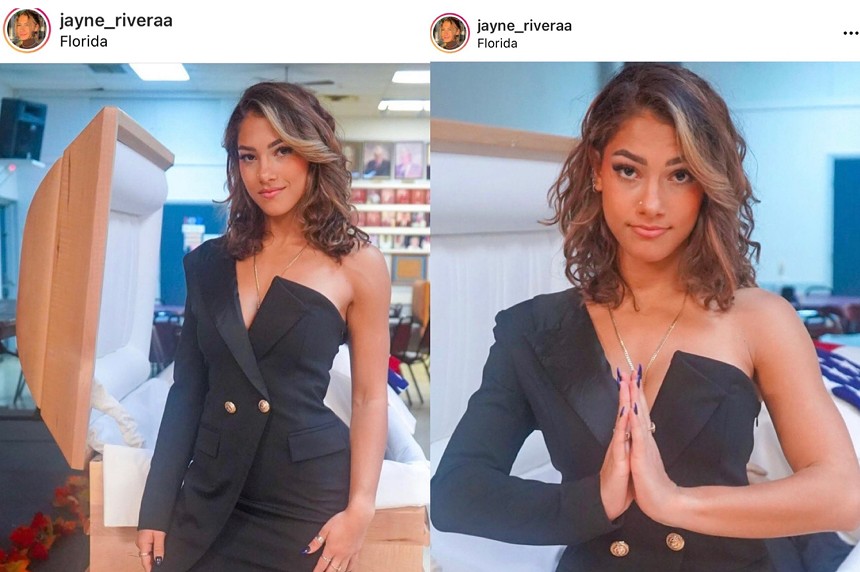 Miami influencer Jayne Rivera posted photos in front of her father’s open casket. The internet did not approve.

Take, for instance, Miami TikToker and influencer Jayne Rivera, who in October posted a series of photos while at her father’s funeral.

In an Instagram post, Rivera shared snaps of herself in a fitted black dress posing in front of Dad’s open casket with the caption: “Butterfly fly away. Rip Papi you were my bestfriend. A life well lived. #rip #papi #veteran #ptsd #funeral #neverforgotten.”

Everyone grieves in their own way, but the Miami way manages to stand out. 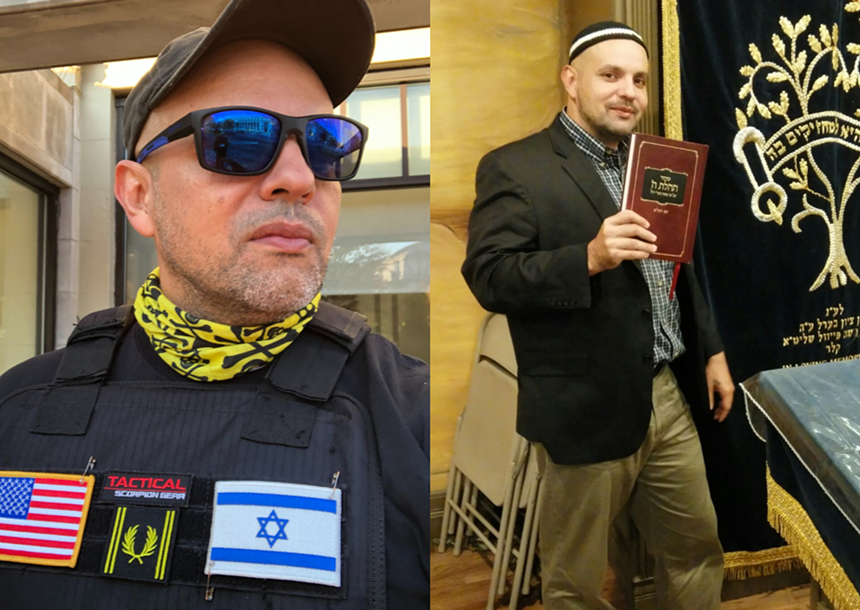 A rabbi, an evangelist, and a Proud Boy walk into a bar, and they’re all the same person.

No other place besides South Florida could spawn the strange confluence of identities and circumstances that would produce a person like Asher Meza: a rabbi (though some would debate that title) who is a member of the far-right group the Proud Boys and who works to convert large numbers of people to Judaism around the world.

This year Meza grabbed the spotlight for offering religious exemptions to COVID-19 vaccine mandates to Jews and gentiles alike, via the messaging app Telegram.

Meza himself is vaccinated, but he told New Times back in October that he wanted to help preserve other people’s freedom of choice.

In the Jewish community, some yarmulkes were ruffled upon hearing that Meza calls himself a rabbi and promotes mass conversions. But it’s his stance on vaccines and affiliation with a national hate group that leaves the rest of South Florida scratching their heads.

Photo by Alex DeLuca/Courtesy of FBI

Speaking of radical hate groups and political wackos, Broward County was not spared this year.

Mason Courson of Tamarac, whom the internet dubbed “#Tweedledumb,” was recently arrested for his involvement in the January 6 insurrection at the U.S. Capitol. The former Cypress Bay High football player was caught in video and screenshot images sporting a red Trump beanie while entering the Capitol with other rioters, interrupting the certification of votes for president-elect Joe Biden.

While Florida has raised its own breed of January 6 insurrectionists, Courson earns a special distinction for being a certified ridiculous Florida man since adolescence. In 2015, when he was 19, Courson was arrested for allegedly punching the owner of Il Bacio restaurant, shoving an officer, and then kicking a nurse at a medical center.

One day he’s trying to overthrow a Delray Beach club/restaurant, the next it’s the federal government.

The Rich, Randy, and Litigious

After a scandalous sexual tryst with the Setai’s general manager, a tenant is banned from her $15,000-a-month rental unit.

The love affair crashed as brilliantly as it began: Furrer’s girlfriend found them out and allegedly threw a drink on Lazow in public. That led to a tense battle between Lazow and Furrer — the former claiming the latter instructed hotel employees to deny her services and access to hotel amenities.

It’s the kind of drama that would normally unfold behind closed doors or under your private browsing tab, but since this is South Florida, it’s transpiring in civil court. 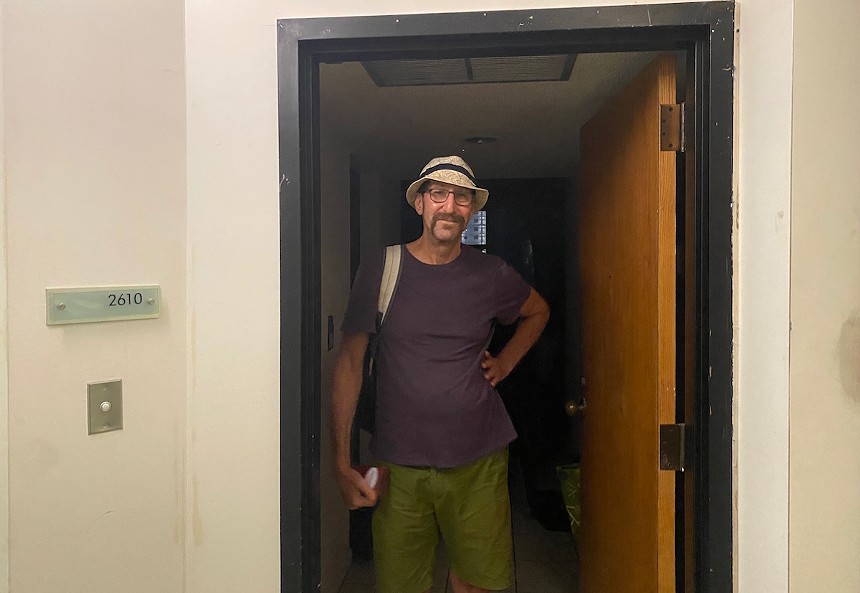 Steven Leidner stands outside his unit on the 26th floor of the Hamilton on the Bay.

Our last South Florida man is an example of the flipside of Miami’s penchant for weird characters: an underdog trying to fight corporate bigwigs (in an admittedly ludicrous way).

Residents of the Hamilton on the Bay apartment complex in Edgewater were told their leases were being terminated by building owner AIMCO, owing to extensive and imminently necessary repairs. But after everyone else went packing, longtime tenant Steve Leidner dug in his heels.

For the past few months, Leidner has been squatting in his old unit, long after AIMCO’s deadline for tenants to vacate. The elevators have been turned off and ongoing construction brings jackhammers and other loud equipment at all hours. Yet Leidner, who is disabled, refuses to clear out of his 18-year home.

Some may call Leidner crazy for living on the 26th floor of an active construction site, but in South Florida, we call him a hero.

click to enlarge Unsafe structures are being reported in the weeks following the Champlain Towers South collapse. When the Florida International University pedestrian bridge collapsed and killed six people on March 15, 2018, it seemed reasonable to be wary of driving on or under bridges and elevated highways in the days […]

The disappearance of van-life vlogger Gabby Petito galvanized the world overnight. In the weeks since she vanished in Wyoming during a cross-country road trip with her fiancé, her story has gripped international and national media. Images of the blond, blue-eyed 22-year-old have dominated social media from Twitter to Reddit and even TikTok, where amateur internet […]