Skip to content
The Narcotics Control Bureau (NCB) has arrested Shah Rukh Khan‘s son Aryan Khan on Sunday, October 3. This development came after raids were conducted by NCB officials on a cruise ship off the Mumbai coast, where multiple people were detained for questioning after illegal drugs were recovered at a party. Lawyer Satish Maneshinde, who will be representing Aryan Khan in this matter, has arrived at the NCB office in Mumbai. According to Times Now, Aryan has been arrested under section 27 of the NDPS (Narcotics Drugs and Psychotropic Substances Act). Soon after his arrest, the star son was taken to JJ Hospital for a medical examination.

Including Aryan, the NCB has detained eight people in this drugs bust, namely Munmun Dhamecha, Nupur Sarika, Ismeet Singh, Mohak Jaswal, Vikrant Chhoker, Gomit Chopra and Arbaaz Merchant. They were presented before the holiday court on Sunday and Aryan’s mother Gauri Khan was snapped heading to court by the paparazzi. According to sources, the NCB that the officials will scan Aryan Khan’s mobile phone to check for traces of his direct involvement in the possession or consumption of drugs.

The NCB has been working on this busy since two weeks. Acting on a tip off, NCB sleuths booked tickets for the cruise party as ordinary passengers and soon found some of their co-passengers consuming drugs. The ship was ordered to return to bay and eight passengers were detained and offloaded along with their baggage. The detainees spent the night in NCB custody. During their investigation, NCB officials recovered drugs like cocaine, charas, Mephedrone and Ecstasy from the cruise party.

Speaking about the case, NCB chief SN Pradhan has told ANI, “We are acting in an impartial manner. In the process, if some connections to Bollywood or rich people emerge, so be it. We have to act within the purview of the law. We have to keep on working in Mumbai. If you look at the data, there must have been more than 300 raids in the last one year. This will continue whether foreign nationals are involved, film industry or rich people are involved.”

Soon after Aryan Khan was detained, a report suggested that Shah Rukh Khan has decided to postpone the shoot of his next action entertainer ‘Pathan’. He was to head to Spain for a special song shoot with Deepika Padukone but now all plans are reportedly on hold. 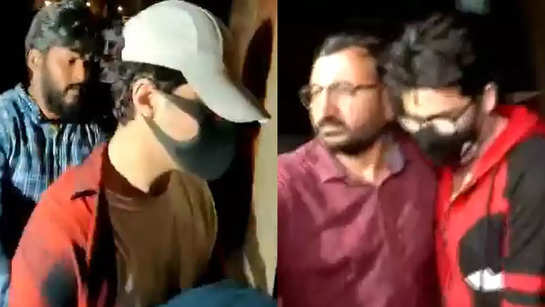 Windows 10 users, features and apps that will be removed or replaced when you upgrade to Windows 11

In Windows machines, the interface includes a special application desktop toolbar called Taskbar. Users can use this for tasks such as switching between open windows and starting new applications. The functionality of Taskbar has been changed in Windows 11. * People are no longer present on the Taskbar. * Some icons may no longer appear […]

Coronavirus live updates: Kerala cases hit 51-day high, India’s tally tops 40k LIVE NOW Covid-19 infections continued to surge sharply in Kerala, with daily cases touching a 51-day high of 18,531 on Saturday, even as India’s tally crossed 40,000 for the second time this week. Stay with TOI for all the live updatesRead Less THE […]

NEW DELHI: Tuesday was a historic day for the Supreme Court as a record nine new Supreme Court judges took oath, the country moved towards getting its first woman CJI, and among those sworn in were three future CJIs and three women judges. In an eye-ball grabbing event held in the 900-seater auditorium with strict […]