SkyWest Airlines hopes to launch its SkyWest Charter subsidiary “shortly”, a move the airline says will enable it to serve secondary cities with on-demand charters.

Some of those cities do not have, or are at risk of losing, air service.

“We have been more than surprised about the outside interest of our charter operation,” SkyWest chief executive Chip Childs said on the company’s quarterly earnings call on 28 July. “There are a lot of parties that want this thing to work.” 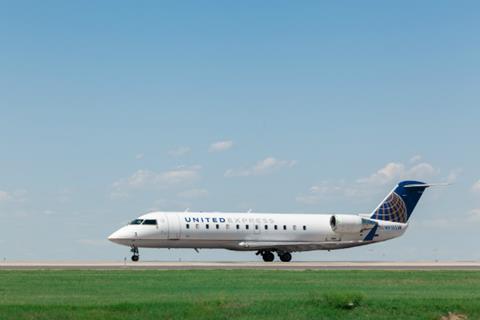 SkyWest applied to the US Department of Transportation (DOT) for commuter authority on 21 June. In its application, it requested to operate 30-seat Bombardier CRJ200s to 25 destinations under a charter subsidiary called SkyWest Charters.

The proposal would also allow SkyWest to hire pilots with less aeronautical experience than required for commercial scheduled operations, taking pressure off the pilot shortage plaguing many US carriers but hitting regional airlines hardest.

SkyWest chief commercial officer Wade Steele says the DOT and airline are “working through the application”.

“Hopefully in the next couple of months we will get this all sorted out,” he adds.

In its June application, SkyWest said it aimed to have the subsidiary running by October, with a five-month ramp-up during which three to four aircraft and four to five markets would be added monthly through April 2023. Eventually, SkyWest expects the charter business will serve 25 markets with 18 aircraft.

Though the exact timing of the charter operation’s launch remains unclear, Steele says it will begin flights “sometime this year…hopefully shortly”.

“I don’t think it will drag out too long,” Steele adds.

Earlier this year, SkyWest also gave notice it was departing 29 cities served under Essential Air Service (EAS) contracts with the US government, citing lack of qualified flight crew. It has already cancelled hundreds of flights since the beginning of the year. The new charter unit is a play to salvage routes to some of those markets.

Ryanair chief Michael O’Leary has scorned British Airways’ proposals to establish a lower-cost short-haul subsidiary at London Gatwick, but the idea is being viewed favourably by analysts at banking group HSBC. BA’s short-haul operation at Gatwick has been on hold, as a consequence of the air transport crisis, but the suspension is complicated by the […]

The price of jet fuel has continued to edge lower over the past month, as weaker crude oil prices have filtered through to the kerosene market. Energy information provider ICIS, which like Cirium is RELX-owned, assessed the price of jet fuel for delivery to northwest Europe at $594.75-596.00/tonne on 17 August, down $7.75/t on the […]

The Case of the Missing Fuel: The story of the Stockport air disaster | by Admiral Cloudberg | Apr, 2022

Crews work to remove the remains of British Midland flight 542 after it crashed in downtown Stockport, England. (Manchester Evening News) On the 4th of June 1967, a deadly drama unfolded in the skies over England as an antiquated propeller airliner lost two of its four engines on approach to Manchester. As the pilots fought […]