Skip to content
MUMBAI: Prolonged closure of schools since the pandemic began has had “catastrophic consequences” on children’s education, according to a new survey of 1,362 schoolkids from underprivileged homes in 15 states and UTs.

The survey revealed that in rural areas, 37% of the sample students were not studying at all—it’s 19% in urban areas— and only 8% were studying online regularly. As many as 48% of the rural children surveyed were not able to read more than a few words.

About 65% of parents in the sample whose children were studying online felt their child’s ability to read and write had declined since the lockdown began.

You have successfully cast your vote

Marginalised communities were the worst affected, the survey found. For instance, only 4% of rural scheduled caste and tribe children were studying online regularly compared with 15% among other rural children. 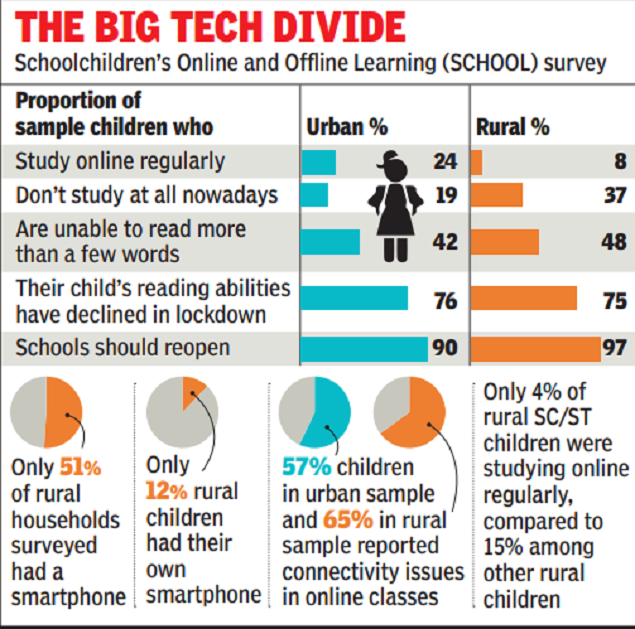 The School Children’s Online and Offline Learning (SCHOOL) survey was conducted this August in 15 states and union territories, including Maharashtra, UP, West Bengal and Karnataka. It was a joint effort of nearly 100 volunteers across the country, with the survey report prepared by a team, including economists Jean Dreze and Reetika Khera. The sample was drawn from deprived hamlets and bastis where most children attend government schools.

The study has not only laid bare the severe limitations of online education in developing countries like India but also reaffirmed the need to get back to schools offline. The digital divide is real and hurts the lower income groups grievously.

The survey revealed a stark digital divide, which posed limits to online learning. Only 51% of rural households surveyed had a smartphone. Even among houses with a smartphone, though, only 31% or children were studying online regularly in urban areas and 15% in rural areas. One key reason was children’s access to smartphones, which are often used by working adults. The survey found that only 12% of rural children surveyed had their own smartphones.

Other issues of online access are poor connectivity and lack of money for “data”. As many as 57% of urban children and 65% of rural children in the sample reported “connectivity problems in online classes. Many found it difficult to follow online material with 46% of the urban sample and 43% of the rural sample reporting this issue.

The report titled ‘Locked Out – Emergency report on School Education’ emphasised the need to reopen schools. As many as 90% of urban parents and 97% of rural parents in the sample wanted schools to reopen. “Most parents feel that their child’s reading and writing abilities have gone down during the lockout. They are desperately waiting for schools to reopen. Indeed, for many of them, school education is the only hope that their children will have a better life than their own,” the report said.

Many reported a decline in literacy levels. As many as 65% of parents in the sample whose children were studying online felt their child’s ability to read and write had declined since the lockdown began. In rural areas, the proportion was 70%. However, despite the mass decline in reading and writing abilities, children were being promoted to higher classes two grades above their pre-lockdown level.

“The survey gives an inkling of the colossal damage created by this extended lockout—one of the longest in the world. It will take years of patient work to repair this damage. Reopening schools is just the first step. After that, the schooling system needs to go through an extended transition period not only to enable children to catch up with a reasonable curriculum but also to restore their psychological, social and nutritional wellbeing,” the report said.

NEW DELHI: Delhi chief minister Arvind Kejriwal on Thursday alleged that just like health minister Satyendar Jain, deputy chief minister Manish Sisodia will soon be arrested in a ‘fake’ case. Jain was on Monday arrested by the Enforcement Directorate in a case related to money laundering. “I had learnt from reliable sources a few months […]

Kolkata: The resignation of a St Xavier’s University teacher in October last year over an Instagram post of her in a swimsuit at home has sparked a privacy debate on social media. Reported by a news portal, the issue is now headed to the courts. The teacher, who has now moved to another state, says […]

NEW DELHI: Twitter India managing director Manish Maheshwari is all set to take up a new role as senior director, revenue strategy and operations at the company’s San Francisco office in the United States (US), news agency ANI reported on Friday. Congratulating Maheshwari for his new role, vice president of Twitter Japan took to twitter […]

One Reply to “Survey: 37% poor rural students not studying at all”