Skip to content
Fort Lauderdale’s culinary prowess has long been overlooked by foodies who seek its neighbor to the south (that’d be Miami) for the area’s most highly touted restaurants.

In recent years, the 954 has seen its fair share of new and old. While many of the city’s tried-and-true restaurants continue to impress, newer establishments have a habit of shuffling in and out, making it hard to keep tabs on what’s hot, which meal you can’t pass up, and where the party’s at.

From longtime favorite haunts that have stood the test of time to the flashy newcomers filled with promise, listed below in alphabetical order are the ten best restaurants in Fort Lauderdale.

Casa D’Angelo has been Fort Lauderdale’s fine dining eatery for over a decade.

The patriarch of fine dining in Fort Lauderdale, executive chef/owner Angelo Elia is known for elevating the city’s food scene with his flagship, Casa d’Angelo. Since he opened his restaurant in 1998, Elia has earned  praise for his culinary acumen, including top spots on Zagat’s America’s Top Restaurants and Wine Spectator’s Award of Excellence. Today, the Italian-born chef’s passion continues to deliver authentic “Old Country” fare at his flagship Fort Lauderdale establishment, where the entire menu of traditional Tuscan dishes is prepared from scratch. While daily specials change depending on the time of the year, menu favorites like the house-made pasta or hearty bistecca alla forentina — a caramelized onion- and mushroom-topped New York strip steak marinated in olive oil, rosemary, and garlic  — remain daily crowd-pleasers.

Like many Philadelphia/Southern New Jersey transplants, Cafe Martorano chef/owner Steve Martorano came to Fort Lauderdale and never left. His restaurant hasn’t, either. If you haven’t been to Martorano’s original red sauce joint off Oakland Park Boulevard, you haven’t had a chance to sample some of the best Italian food the city has to offer. Over the past 30 years, Martorano has established himself as one of Broward County’s most colorful restaurateurs as the chef/owner serving up his Philadelphia-style Italian comfort food classics — with a side of entertainment. Though its old-school menu of Italian classics — such as chicken cacciatore and pappardelle with sausage — are delicious, regulars flock to the restaurant for the people behind the food. With his ingredient-driven approach, the chef is able to pay homage to classic Italian-American dishes that cover meat, seafood, and pasta. Don’t miss the made-to-order warm mozzarella or the famous homemade meatballs.

Canyon has been dishing out its top-rated bread pudding dessert for decades.

Peruse the menu of just about any Mexican restaurant in South Florida and you’re sure to find some take on the chile relleno, a poblano pepper stuffed with cheese, coated in batter, and fried. Yet, more than 20 years since opening its doors in Fort Lauderdale, Canyon’s upscale take — a crispy-thin blue cornmeal shell fried to perfection and oozing with melted herbed goat cheese — still manages to elevate the dish to new heights. It also happens to pair perfectly with Canyon’s prickly pear margarita. Made in small batches, the fresh-cut cactus is marinated in blue agave tequila until the fruit leeches both flavor and color, lending the drink its hallmark blush-pink hue. They’re just two “must-haves” from chef-owner Chris Wilber, who’s been cooking many of the beloved dishes on the Canyon menu since the mid-’90s. Here, the chef departs from the straight and narrow definition of Southwest cuisine with hints of Asian, South, and Central American influences, offering guests a short but sweet menu that always offers something new. 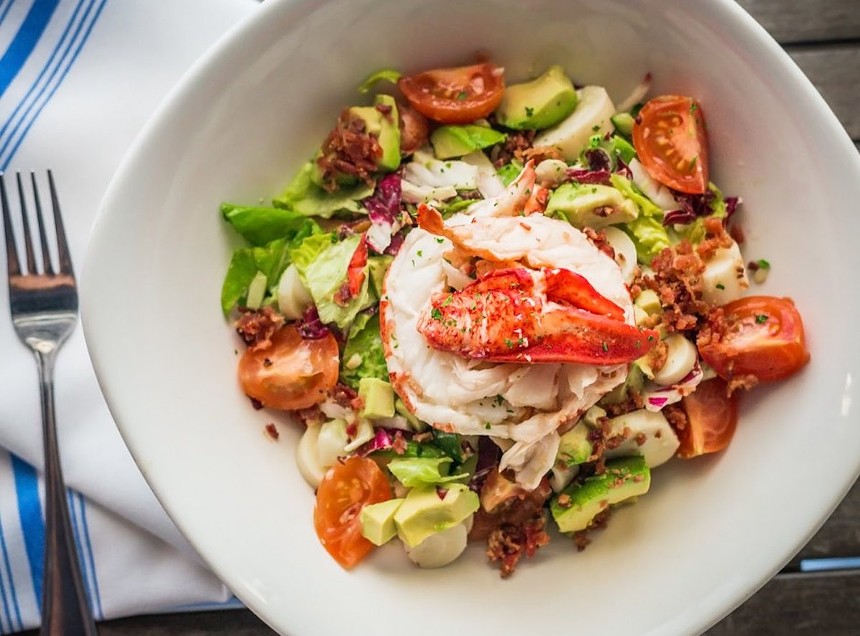 Given its location in the thick of the Fort Lauderdale Beach chaos, where A1A and Sea Breeze Boulevard meet, Coconuts might seem like just another tourist-themed restaurant. But if you pass up this longtime local favorite, shame on you. This is Florida dining at its finest, from the expansive outdoor patio with uninterrupted views of Fort Lauderdale’s Intracoastal waterway to the menu of Floribbean classics — with a few unexpected twists. The menu sports the requisite South Florida blackened Mahi Sandwich, smoked fish dip, and conch fritters. But there are also a few surprises from the lobster club sandwich and crab empanadas to a massive slab of Danish baby-back ribs smothered in a chipotle-pineapple barbecue sauce. Pair any of them with a boozy cocktail and you’ve just found your new favorite beachside haunt.

When Gary Bouvier and Josh Perfit discovered that the unique space at 1818 East Sunrise Boulevard — the former home of Canyon restaurant — was available, the duo didn’t hesitate to pounce. Today, much of the intimate interior remains the same, from the dimly lit ambiance and amber-hued walls to the window-backdrop banquettes and eight-seat bar. What has changed is the focus, with an upscale, European-minded menu created by executive chef/partner Gastón Campaña. The chef showcases his talents with dishes featuring high-end cuts of beef, pork, and lamb alongside seafood and handmade pasta. Don’t miss Campaña’s bolognese, a tangled marvel of handmade fettuccine smothered in a hearty marsala-spiked sauce that combines long-braised veal, pork, and beef. The icing on this cake might be the fresh-baked, oversized sticky bun the chef recommends for dessert. 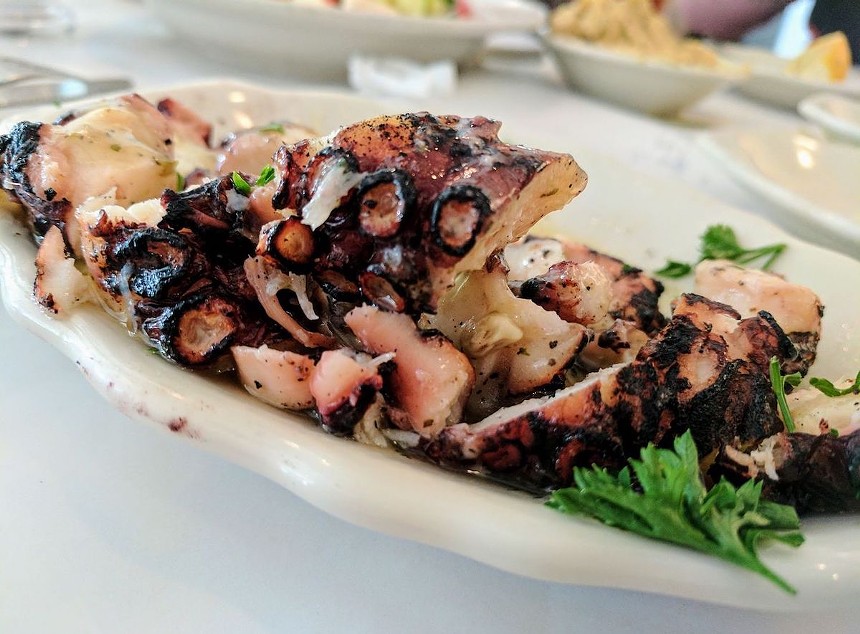 Greek Islands Taverna is a favorite of locals and tourists for its authentic Mediterranean fare.

The signature kalamata olive-spiked “ladoregano” sauce at Greek Islands Taverna is so popular, the restaurant had to bottle it. The family recipe smothers nearly everything you can think of on the menu, from the signature lamb chops, shrimp, and ribs to the family-size salads and massive meze platters. There’s plenty to love about this beach-adjacent Greek restaurant, which keeps patrons coming back for hearty, authentic Greek fare. Brothers Sam Sotiri and George Kantzavelos offer the kinds of dishes local, tourists, and Greek natives can all appreciate.

Heritage is a stunning newcomer to the Fort Lauderdale dining scene.

Heritage chef/owner Rino Cerbone, who opened his neighborhood restaurant in the up-and-coming Flagler Village, is quietly redefining what good Italian should taste — and look — like. You won’t find the classic red sauce staples here, but you will find pasta and pizza done with care and respect. No bruschetta, no tomato and mozzarella, no antipasto here. Instead, expect mascarpone-stuffed squash blossoms and baked razor clams. Many dishes here shine, but take special note of the mafaldine bolognese. One of just three pasta dishes on the list, the dish’s slow-cooked sauce gets its flavor from a mixture of pork, veal, Wagyu, and pancetta, rendering a rich stew that is a meal in itself.

No Man’s Land is a flashy newcomer to the Fort Lauderdale dining scene.

A passion project from hospitality veteran and Big Brother reality TV star Memphis Garrett, No Man’s Land is the new kid on the block, offering locals and visitors an experience unlike anything else in Fort Lauderdale. The sultry cocktail parlor and kitchen check all the boxes with exquisitely crafted cocktails, inventive small plates, and beautifully appointed marble tables embraced by blue velvet banquettes. Executive chef Austin Blake shines with dishes that flex both technique and creativity. Designed for grazing, the chef’s culinary creations mesh with the spirit-forward cocktail list, from the foie gras “Old Fashioned” — which weds a bourbon-cured terrine, Luxardo gastrique, and Angostura mascarpone to thick slices of Demerara brioche — to an espresso martini-themed dessert of amaretto-infused mascarpone and espresso-soaked ladyfingers served over house-made vanilla gelato. 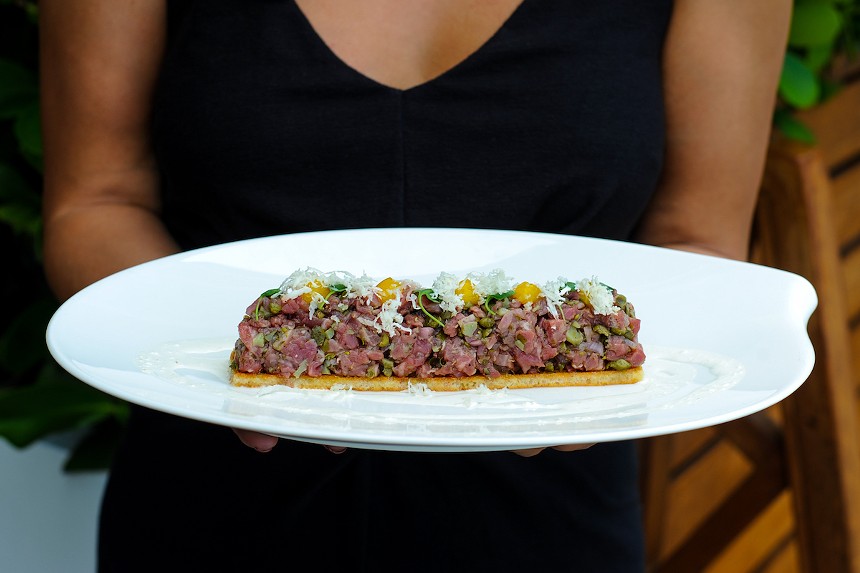 At Stephen Starr’s Steak 954 in the W Hotel on Fort Lauderdale Beach, a slider is not just a slider. It’s Kobe beef topped with sweet caramelized onions and sandwiched between rounds of buttery brioche. A bone-in veal chop is juicy; a plate of Mediterranean bronzini served with a jewel-like array of vegetables is as light and delicate as any fish that ever swam. Even a tuna and foie gras taco (weird as it sounds) is a luscious flavor pairing. Since opening in 2009, the massive indoor/outdoor restaurant, which features a mesmerizing 15-foot long jellyfish aquarium at its entrance and an oceanfront locale, creates a seductive vibe that’s worth savoring. 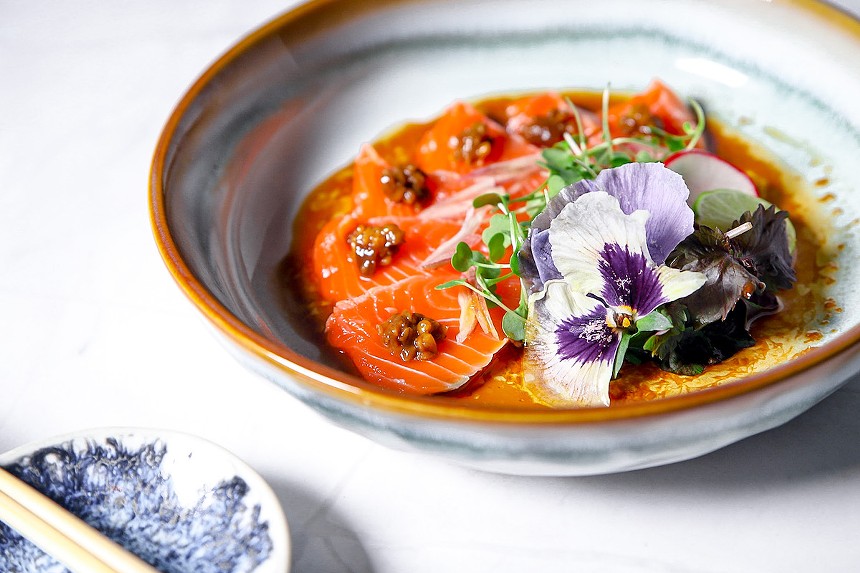 Takato offers a mashup of Japanese and Korean flavors in Fort Lauderdale.

Takato, meaning “in a state of extreme happiness” in Japanese, will deliver just that. This year-old establishment has quickly become one of the jewels of Fort Lauderdale beach. Here, executive chef Taek Lee’s upscale menu of sharable small plates and entrées shows off Lee’s approach to Japanese and Korean fusion. Signature dishes include braised short ribs served over a nest of sweet potato noodles; and a Wagyu skirt steak topped with a wasabi-spiked chimichurri. It’s not unheard of to see traditional dumpling makers kneading and filling dough from scratch before delivering fresh batches via sleek rolling carts, or catch a glimpse of diners enjoying tableside wasabi, cocktail, and culinary presentations. Recently, the restaurant also launched its own omakase lounge, offerings guests a more intimate experience.

It gets oddly personal to the audience when a DJ circumvents the nigh-constitutional guarantee that they will play only one genre during a set. And with more styles and sounds interwoven today than ever before, sonic homogeneity has earned its retirement. Few DJs can warp, bend, and blur sounds together better than Siberian DJ, producer, […]

July 9, 2021 Click here to Book Have you been trying to find a Chicago birthday party venue, but have had no luck yet? Maybe it is time to check out Howl at the Moon, located in Chicago’s River North neighborhood. Our live music show, great drinks and awesome atmosphere will make for an unforgettable […]