Skip to content
Twenty glass orbs of various shapes, sizes, and colors neatly surround a pink wicker armchair. Previously lit candles with black wicks and melted wax emerge from the edges of the chair like spikes on a throne. The scene, part of an installation piece by artist Betye Saar titled Oasis, sits atop a fresh collection of sand. The sand’s soft, ivory hue allows the individual pieces to pop visually and yet sink peacefully into the manmade dunes.

Eight of Saar’s unique installation works will be exhibited as part of an upcoming show at the Institute of Contemporary Art, Miami (ICA), “Serious Moonlight,” opening October 28.

Many of the works, including Oasis, have not been displayed in more than 30 years. The exhibition at ICA will be the first show in decades dedicated exclusively to Saar’s installation pieces, explains curator Stephanie Seidel, who adds that many of the objects have been preserved in Saar’s Los Angeles studio.

“While most of the objects that are in these installations were still available, for Oasis, we were able to refabricate these glass spheres [locally] with the University of Miami glass laboratory,” Seidel adds excitedly. “The piece will be on view for the first time since the ‘80s, and I’m really excited for everyone to see it.”

Saar, 95, is a recognizable name in the art world, known for her assemblage pieces and works dealing with the themes of race and feminism — long before the Black Lives Matter or Me Too movements sparked. 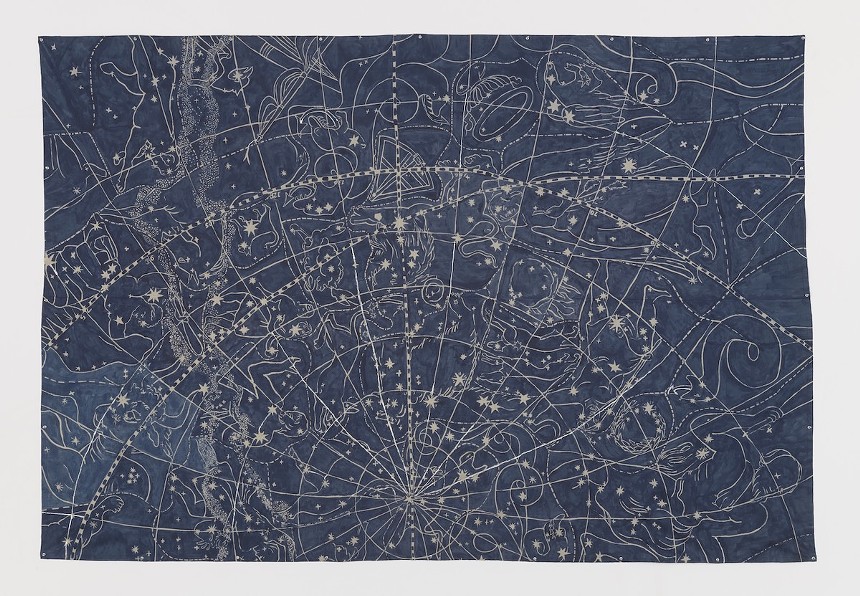 “Betye Saar has been influential for so many generations of artists and while many people know her for her assemblage work not many people actually know she’s also done these beautiful installations that can fill entire spaces and allow for a fully immersive visitor experience,” Seidel says. “Her works are still so incredibly timely.”

Seidel first started coordinating with Saar’s team in 2018. Plans hit a snag with the pandemic, but, the curator says the extra time allowed for a deeper study and understanding of the work.

The tenderness with which Seidel has curated the show comes across with the setup. Installations were placed to allow visitors to weave their own path while simultaneously feeling engulfed by each individual creation.

While building out the show, Seidel was keenly aware of Saar’s personal views on the art and how the artist uses the sense of ritual to approach art-making.

“The act of making art, for me, is a ritual,” says Saar, corresponding with New Times via email. “The ‘prescribed series or set of acts’ include the following procedure: The imprint — ideas, thoughts, memories, dreams, from the past, present, and future. The search — the selective eye and intuition. The collecting, gathering, and accumulating objects and materials, each bringing a presence, an energy. The recycling and transformation — the materials and objects are manipulated and combined with various media. The energy is integrated and expanded. The release — the work is shared, (exhibited), experienced, and relinquished. The ‘ritual’ completed.” 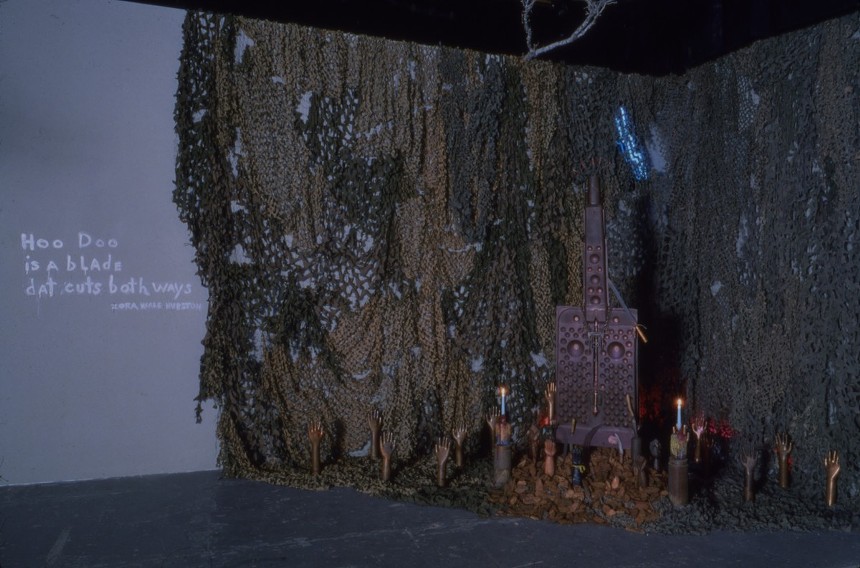 “Serious Moonlight” showcases Saar’s lesser-known installations and explores her interest in the theme of spirituality, specifically in relation to the African diaspora and the African-American experience. All the works featured were created between 1980 and 1998. During this period of creation, Saar was heavily influenced by trips she’d made to Haiti, Mexico, and Nigeria in the 1970s.

While some pieces are meant to be marveled at from a distance, others encourage participation. Wings of Morning was created at a time when Saar herself was mourning the loss of her mother. ICA curator Seidel explains how many of the works take on the appearance of an altar and how with Wings of Morning in particular, visitors will be able to leave a small offering or note in honor of their own personal losses.

“I collected metaphysical objects, altars, and items related to ancestral history,” Saar writes in an email, adding that she was heavily influenced by a 1975 article by Arnold Rubin, in which he describes the power certain materials have on a piece. “Rubin described how the borders around a rug are used to protect the inner area. If it is sacred — for instance, a prayer rug — then the inside of the design is the sacred part, and the fringe is there to prevent negativity from entering that inner area. I found that very interesting.

“If you’re making an assemblage, there’s power in a certain part of the piece and then all the rest is decoration, either to throw off the negativity or to attract positive feelings. That’s how I felt about my boxes or collages: The sacred element is located in a particular place in the composition; the rest is just a display, used to entice the viewer to look at the work.”

click to enlarge It’s been 18 years since a Titan Arum bloomed at Fairchild, and this specific plant — affectionately dubbed Mr. Stinky Junior — is expected to bloom at the garden’s Whitman Tropical Fruit Pavilion…perhaps as early as today! Photo courtesy of Fairchild Tropical Botanical Gardens […]

July 14, 2021 Enter to win Time to bust out your favorite JNCO’s, make sure your Tamagotchi is fed, and grab your Walkman while we go through some of the best songs from the 90’s. If you remember going to a party in the 90’s you know they weren’t complete without hearing these songs. Maybe […]

click to enlarge Veza Sur and Chifles have collaborated on a plantain chip-infused beer. Photo courtesy of Veza Sur. Veza Sur cofounder Marshall Hendrickson and his brewers have experimented with making beers before. But they really had no idea what the results would be when they tossed […]