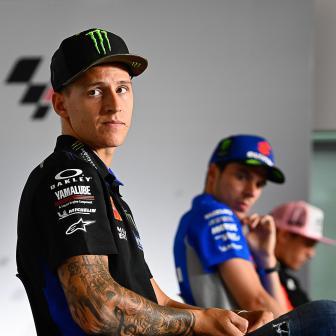 Marc Marquez held his hands up and apologised to Jorge Martin after taking the Pramac Ducati rookie out during a clumsy pass on the opening lap of Sunday’s British MotoGP at Silverstone. Crash MotoGP Podcast – Click here to listen to Keith Huewen, Harry Benjamin and our own Pete McLaren talk MotoGP The pair, who have […]

It’s a Red Bull KTM Ajo 1-2 at the summit ahead of qualifying as the times tumble on Saturday morning World Championship leader Remy Gardner (Red Bull KTM Ajo) laid down the gauntlet in Moto2™ FP3 at the Bitci Motorrad Grand Prix von Österreich by setting a new lap record at the Red Bull Ring. […]