Key stakeholders in the UK’s air transport industry have lamented the impact of Brexit as they urged the government to put the sector at the centre of growth plans for the wider economy.

Speaking during the Airlines 2022 event in London on 21 November, speakers representing airlines and airports expressed particular concern about the effects of the UK’s departure from the European Union on future economic growth prospects.

“There’s no doubt that Brexit has damaged the UK economy, 99% of leading economists would tell you that,” says Manchester Airports Group chief executive Charlie Cornish. “You just need to look at the UK’s rate of growth now [versus its EU counterparts].”

Highlighting an example of that damage, Cornish cites the huge number of EU citizens who have left the UK since the Brexit vote, saying this restricts the aviation sector’s ability to recruit “at scale and at pace”. 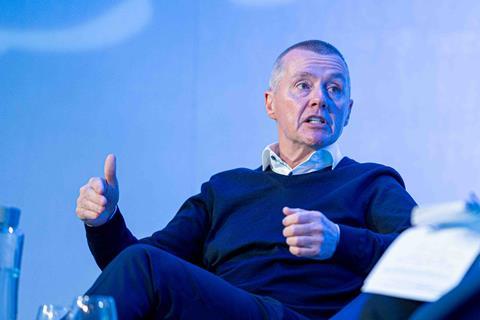 The UK’s aviation minister, Charlotte Vere – known as Baroness Vere of Norbiton – had earlier told the conference that a Brexit benefit was the UK’s ability to proceed with airspace modernisation in a “different” way to the EU’s approach.

Walsh does not consider that a meaningful benefit of Brexit, however, and suggests that UK airlines are fundamentally disadvantaged by no longer being able to “cooperate freely within that larger [EU] market”.

That view is echoed by FedEx Express’s senior vice-president of air network and global trade services for Europe, Jorn Van de Plas, who says Brexit has made UK operations “more complicated” and has “brought our service down” because goods are “stuck at the clearance point”.

Amid those challenges, many speakers said the government should start to view aviation as a key strategic asset while formulating a post-Brexit growth plan for the wider economy.

“We do need the UK government to look at how we actually get a sensible economic growth plan back into the UK, with aviation at the centre of that,” says Cornish.

“If [this] carries on, the UK’s ability to be competitive will get eroded every single year,” he warns of the current challenges.

Heathrow airport chief executive John Holland-Kaye concurs on the need for a “positive plan” for the UK outside the EU.

The country should be “making the most” of its aviation assets, the Heathrow boss states, while working out how it can position itself as a “competitive economy and trading nation”.

“This is where the work we are doing to expand Heathrow becomes even more [critical],” Holland-Kaye says. “We need to have the hub airport capacity to reach the countries that we need… to be a successful trading nation.”

Walsh expresses doubts, however, about government appetite to change its approach to aviation in the post-Brexit UK: “The vote was taken, the decision was to leave… but I can’t see… six years on, what people are doing to maximise the value of that,” he says.

Vere had earlier said that outside the EU, the UK “will be able to develop our aviation sector as we have done previously… [through] more aviation services agreements, if we need them, [and] better relationships with international markets”, adding that she was also comfortable with the country adopting “elements of what the EU did before” in regulatory terms.

View Aviation Jobs in Washington View and apply for aviation and aerospace jobs, send your resume and receive our jobs newsletter free. Avjobs is free for applicants, and – we offer advanced services to help you get to work faster. Avjobs has over 50,000 aviation companies and contacts in the aviation and […]