Secretary of the US Air Force (USAF) Frank Kendall is unequivocal about where his service is focusing its energy and budget.

“China, China, China,” Kendall said on 19 September during an event near Washington hosted by the Air & Space Forces Association. “I have been beating the drum on China’s military modernisation for many years.”

His comments come amid increasing tension between the USA and China, which just days ago levied sanctions on top executives at Boeing and Raytheon Technologies. 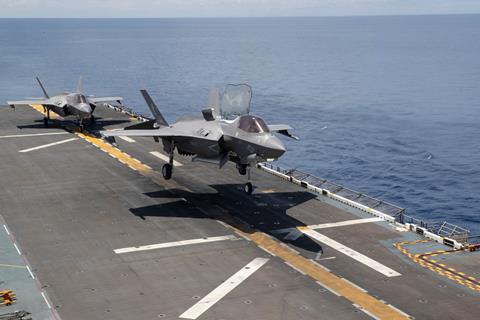 Kendall says threats posed by China are finally receiving appropriate concern in Washington following years of disinterest. The USAF, he adds, is orienting its budget and strategic focus toward the Indo-Pacific theatre – a shift aligning with broader Department of Defense (DoD) strategy.

The USAF’s Fiscal Year 2024 funding will reflect changes necessary to meet threats from advancing authoritarian powers, Kendall says. That budget remains unsettled, but USAF development projects include procurement of a new strategic bomber – Northrop Grumman’s B-21 Raider – and the Next Generation Air Dominance (NGAD) programme to develop a sixth-generation aircraft. Kendall describes those modernisations as necessary to counter a “rapidly changing and competitive threat”.

Tension in Indo-China escalated in recent weeks after US House Speaker Nancy Pelosi visited Taiwan in August. China responded with military drills. In an interview aired on 18 September by news programme 60 Minutes, President Joe Biden confirms the US would respond militarily to a Chinese invasion of Taiwan.

A recent analysis by the Center for Strategic and International Studies concluded the USA would succeed at keeping China out of Taiwan – but at extraordinary cost. The study warns the USA and allies could lose up to 900 aircraft. Of those, 90% could be destroyed on the ground, and USAF bases in Japan and Guam would be especially vulnerable to Chinese missile strikes, says Mark Cancian, who led the analysis.

“China would be making an enormous mistake in invading Taiwan,” Kendall says. He sees no evidence any such action is imminent but notes the risk of war increases as China’s People’s Liberation Army continues its multi-decade modernisation campaign.

The secretary also cautions Beijing about pitfalls encountered by Russia following its invasion of Ukraine. Those include economic sanctions and unreliable assessments by Russia of its own military capabilities and those of Ukraine.

Kendall and his top generals say air power is decisive in countering such threats.

“If Russia would have had air superiority, we would not have been able to resupply Ukraine,” General James Hecker, commander of US Air Forces in Europe, said on 19 September, also during the AFA event.

The Pentagon has provided Ukraine more than $15 billion of equipment, ranging from precision munitions to aircraft spare parts.

Hecker, an Boeing F-15 pilot by training, says if either Ukraine or Russia had air dominance, the outcome would have been decisive. “If you had air superiority, a lot of this war we’re seeing wouldn’t be happening”.

“These integrated air defences are very hard to get through”, says Hecker. “We in NATO would have a very hard time”.

Heckler says Ukrainian air defence troops, who operate the same Soviet-era systems as Moscow, downed an estimated 55 Russian jets during the opening weeks of the war.

Secretary Kendall also stresses the need for the USAF to address recruiting challenges, saying the service will meet enlistment goals this year but by a thinner margin than typical.

The USA’s FY23 defence budget includes the largest pay increase in decades, which should help. The USAF is also cancelling plans to eliminate pay bonuses for speciality jobs like recruiters, and is seeking to offer improved child care at its bases.

Those efforts come as the USAF’s operational fleet has reached its smallest size in decades, according to analysts.

Image by Peace,love,happiness from Pixabay The end of “Where No One Has Gone Before, Pt. 02” After the ceremony, we celebrated with a short reception that included all the usual things — dancing, drinking toasts and a wedding cake Jonathan had made in the galley. I wondered how he got it down to Huygens without […]

Latin American operator LATAM Airlines Group is expecting to exit its US bankruptcy-protection process in the second half of this year after its restructuring plan secured court approval. The operator says the plan has been backed by “nearly all” of its creditors, following months of negotiation and mediation which, according to a relevant 18 June […]

JetBlue Airways has launched another push to take over Spirit Airlines by urging the low-cost carrier’s shareholders to vote against a planned acquisition by Frontier Airlines. New York-based JetBlue has also revised its offer to purchase Spirit, and is now offering to buy the airline for $3.3 billion, or $30 per share. JetBlue previously offered […]