European and US regulators have set out proposals to modernise and harmonise aviation data connectivity, which currently relies on limited-bandwidth connections.

Connectivity demands are rising owing to higher-capacity air traffic services datalink and the greater use by modern aircraft of operational and maintenance data transmission.

“There is a need to look to the future and bring the system up to modern-day standards making use of technologies such as broadband,” it states.

EASA and the US FAA have co-operated with Airbus and Boeing on a proposal to modernise aviation data communication by 2035, and to maximise use of scarce spectrum resource. 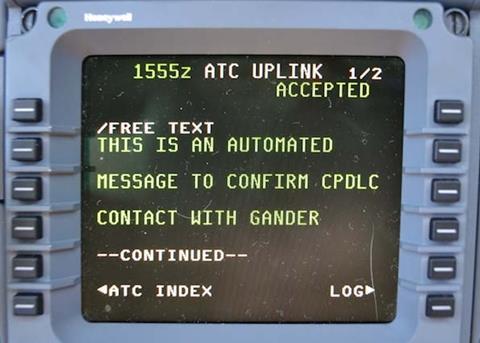 It is aiming for B2 over Internet Protocol Suite for air traffic management connectivity, making use of VDL2 datalink and satcom performance class B for future physical links.

Task force members have selected their recommended options based on safety, capacity, spectral and economic efficiency, interoperability and future-proof technology.

“The recommended solutions, along with the proposed transition roadmap, are defined to limit the overall investment costs…and to optimise the share of complexity between air and ground, while providing the required performance,” says the task force proposal.

It also takes into account the need to support multiple protocols and aircraft configurations during transition.

“For the first time, we have a common vision from all four organisations in the task force, to establish modern air-ground communications that will meet tomorrow’s requirements,” says EASA executive director Patrick Ky. “This is the first step toward achieving this, and a major one.”

Buffeted by hurricane winds, higher fuel costs and operational constraints, Spirit Airlines reported a loss of $36.4 million in the third quarter of 2022. The discount airline’s performance is down from the three months ending 30 September 2021, when it posted a profit of $14.8 million.  “Our current financial results are disappointing,” Ted Christie, Spirit’s chief executive, […]

No, it’s not just you: everyone nowadays really is talking about space. On a given day, there might be news on an astronaut launch, a new satellite constellation, or another country’s national space initiative. In case you missed it, the first ever fully privately-funded astronaut mission flew to the ISS earlier this month — also […]

At your service: why Bombardier is stepping up in aftersales | Paid content

Your business jet might be the best-equipped on the market, unrivalled in terms of performance, and attractively priced. But if your manufacturer fails to match that with an aftersales service you can rely on to keep your multi-million-dollar asset mission-ready at all times, wherever you are in the world, that value proposition quickly loses its […]