US regulators have laid out formal requirements for the Airbus A321XLR’s lower fuselage in the vicinity of the rear centre fuel tank be resistant to fire penetration.

The large tank – situated in the aft fuselage, with the top of the tank directly below the passenger cabin floor – is crucial to the A321XLR’s range capability but the unusual structure has prompted concerns over fire risk in the event of an accident.

It will be integral to the aircraft, with the exterior A321XLR fuselage skin forming part of the tank wall.

“These areas will lack the thermal [and] acoustic insulation that usually lines the exterior skin of an airplane fuselage,” says the US FAA in a 6 December regulatory filing.

This design was “not envisaged” by safety criteria originally drawn up for transport aircraft, which requires any thermal and acoustic insulation in the lower half of the fuselage to comply with “stringent” flame-penetration resistance tests.

Such insulation was intended to provide an additional barrier between passengers and the source of a fire – particularly one resulting from a pool of spilled aviation fuel. 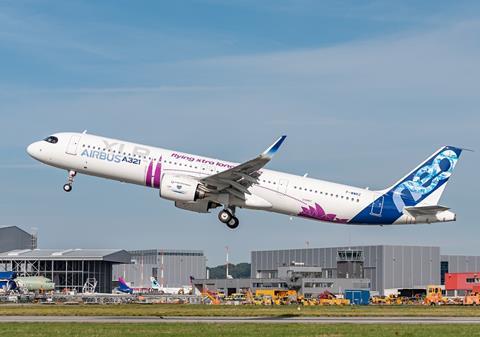 “Accidents have illustrated the threat that exists due to fuel spillage from damaged aircraft fuel tanks that result in pool fires that penetrate into the cabin,” states an FAA advisory circular on insulation installation.

“Research has shown that the [aluminium] skin currently in use offers little opportunity to prevent burn-through.”

Thermal and acoustic insulation, it says, can delay onset of fire into the cabin for a “sufficient” length of time to allow passenger evacuation.

But the fire-resistance rules for insulation do not actually demand that insulation be fitted to the aircraft because, at the time, lower-fuselage insulation was assumed to be a normal design feature.

The design of the A321XLR rear centre tank, however, does not allow compliant insulation to be placed beneath the cabin floor.

This means passengers seated above the tank could experience discomfort from the cooling effect of the large quantity of unheated fuel beneath them.

Airbus has opted to fit insulating panels between the top of the tank and the cabin floor, to aid passenger comfort. But the limited space, and the need for ventilation and to keep nearby decompression panels free of blockage, means the airframer is not able to meet the normal regulatory compliance standards for thermal and acoustic insulation.

This has resulted in the FAA’s having to revisit its rules on fire resistance, given that the A321XLR’s design contradicts the assumption that the lower fuselage would be fitted with normal insulation.

“Specifically the FAA will require that the lower half of the airplane fuselage, spanning the longitudinal area of the tank, be resistant to fire penetration,” it states.

This resistance will be “equivalent” to that which would have been provided if the fuselage was fitted with normal thermal and acoustic insulation, it adds, in order to address the burn-through “vulnerability”.

Such resistance could be achieved through the construction of the fuel tank itself, giving it inherent flame-penetration properties, or the inclusion of other surrounding features.

Boeing has submitted comments to the FAA regarding Airbus’s application for special conditions to apply to the A321XLR tank.

The US airframer requested that the A321XLR rear tank fire-resistance capability should be equivalent to that of the wing-box area, arguing that the FAA’s proposal – based on equivalence to thermal insulation of the fuselage – “does not address” hazards associated with fuel tanks.

But the FAA has rejected this, stating that the special conditions are “not intended” to ensure that the rear centre tank is constructed to ensure fire-resistance similar to that of the wing-box area.

“This [A321XLR tank] design presents a [burn-through] vulnerability that is addressed by these special conditions,” it adds. “The same vulnerability does not exist with transport airplane wing-box construction due to that structure’s significant mass, and large surface area that dissipates heat.”

There is no requirement for adding insulation over the wing-box, the FAA states, because this “would not contribute” to fire-penetration resistance.

For Emirates Airline, being a key driver of new and existing widebody programmes has long been a double-edged sword, with recent issues at airframers leaving it particularly vulnerable to several unfavourable developments. The Dubai carrier has almost 200 widebody jets on order, Cirium fleets data shows, as it eventually seeks to replace ageing Airbus A380 and […]

Roll-Royce and Air China have signed a joint venture agreement to set up an engine MRO facility in Beijing.  The new joint venture, called Beijing Aero Engine Services Company Limited (BAESL), will support Trent 700, Trent 1000 and Trent XWB-84 engines.  When fully operational in the mid-2030s, the facility will support up to 250 shop […]

Vertical Aerospace has now completed 14 tethered test flights of its VX4 prototype following the aircraft’s initial lift-off on 24 September – equating to a sortie once every three days.  Disclosing the total in a letter to shareholders in conjunction with the release of its third-quarter results, Vertical says extensive “taut tether propeller turning tests” […]