The US Navy recently conducted a demonstration to explore the potential of ship-launched unmanned air vehicles (UAVs) operating at long ranges.

According to the Naval Air Systems Command (NAVAIR) the work took place from 11-15 July aboard USS Paul Hamilton near San Diego. It involved UAVs from two vendors, Insitu and L3 Harris. 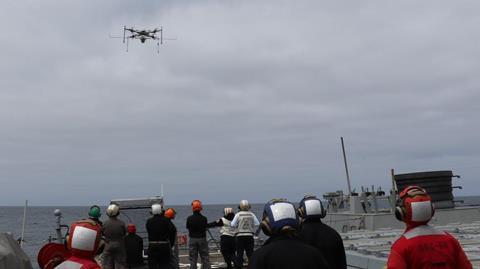 “This event was a great opportunity to evaluate unmanned capability in a relevant environment, learn how it can support and enhance operations, and get direct feedback from the fleet,” says US Marine Colonel Victor Argobright, head of the Navy and Marine Corps Small Tactical UAS (unmanned aircraft system) programme.

“A lot of work was done in a short time across the enterprise to make this happen.”

The two companies demonstrated technologies whereby a shipboard UAV operating in challenging conditions can provide the same coverage as a shore-based system.

The systems operated at extended ranges and related information back to the host vessel. In addition, they needed to deploy “without dedicated launch or recovery equipment, and have maximum portability, self-sufficiency, and modularity across UAS payloads,” says NAVAIR.

The government will review the data generated during the exercise.

NAVAIR did not specify the ranges at the which it aims for shipborne systems to operate.  The Insitu RQ-21, which the navy operates from ships, has a published range of 50nm (93km).

Following a selection process, either Insitu or L3 Harris will be awarded an Other Transaction Authority (OTA) prototype project. While not a formal contract, OTAs allow for development activities to more rapidly advance new technologies.

Vietnamese carrier Bamboo Airways is expected to operate direct charter flights to the US West Coast from 23 September, after receiving regulatory approval.  It has been cleared to operate 12 direct flights from Vietnam through November, according to the airline’s Facebook page.   It expects to operate from Hanoi and Da Nang to cities such as […]