Weakening of the euro against the US dollar generated a foreign-exchange impact of €140 million which exacerbated budget carrier Wizz Air’s losses over the first quarter.

But a revaluation of US dollar-denominated lease liabilities resulted in the unrealised foreign-exchange loss, and deepened the airline’s net loss to €452 million.

While the carrier generated revenues of €809 million over the quarter, the load factor of 84.7% trailed the pre-crisis figure of 93.7%, and this lag – mainly the result of ramp-up – kept unit revenues 10% down on the pre-pandemic level.

Chief executive Jozsef Varadi says that the largest part of the summer ramp-up is “behind us” and that the airline will work to maximise unit revenues given the higher input costs. 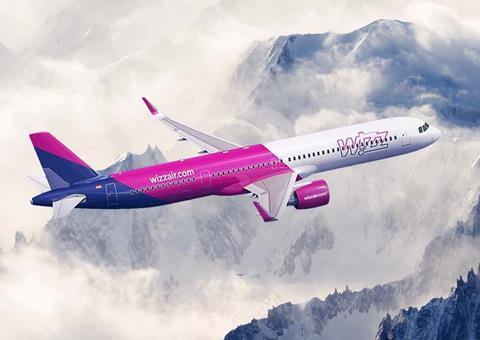 The airline is to offer 30% more capacity over the summer compared with pre-crisis levels, and expects to benefit “month-on-month momentum” in fares and loads.

Varadi believes unit revenues will improve by 10% on pre-crisis levels during the second quarter.

But he remains “very conscious” of the economic environment, pointing out that fuel prices for the quarter doubled from pre-pandemic figures, and the carrier is still subject to effects from “lingering” travel restrictions, supply-chain and operational disruption, and the conflict in Ukraine.

Fuel expenditure totalled €508 million for the first quarter, pushing up overall unit costs. Unit costs were 40% higher against pre-pandemic levels, with 75% of the increase resulting from commodity inflation.

But Varadi says the airline invested over the period to “re-establish” its “proven” operating model, and that the carrier is seeing the results in the second quarter.

“We expect to deliver a material operating profit as revenue and pricing momentum continue to improve,” he adds.

Wizz has reined-in its original capacity objectives for the summer, in order to reduce the risk of operational disruption, and has been encouraged by the resulting signs of “normalisation”.

Vietnam is suspending various domestic routes to and from Ho Chi Minh City to stem a recent Covid-19 spike in its capital. Flights between Ho Chi Minh City and the northern coastal city of Vinh have been suspended from 2 July until further notice following a request from Nghe An Province authorities, according to a […]